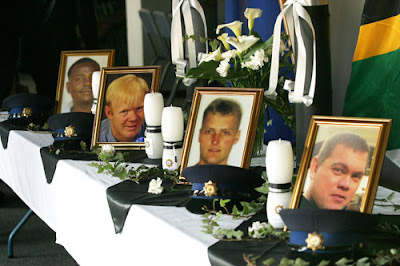 Protect And Serve - Not Die

On Sunday 25th Junes 2006 you were on duty
Little knowing what was expected of you
To come up against the trained forced of evil
Lead to your fate by Lucifer, the Devil
You were outnumbered, outgunned and slain
Like pigs going to their slaughter

Out numbered, not once, out spirited
You stood your ground like heroes
You carried your cross like disciples
You paid the supreme price with your flesh
You have all earned a place in heaven
While your enemy will languish in HELL!

For 19 months, photographs of the Jeppestown bloodbath lay hidden in police dockets and court files - but today it's clear why the June 25 2006 shootout was dubbed a massacre.

Some of the 1 000-odd images presented to the Johannesburg High Court on Wednesday are too grisly to publish, but they tell the real and frightening story of a raid gone very wrong.

The most striking photograph shows two slain police officers - Constable Pieter Seaward and Inspector Gert Schoeman - on the floor in a final embrace.

Seaward's right hand is resting on his colleague's arm, his left hand is tucked under Schoeman, only the hand protruding.

Their blue uniforms are covered in blood and dust from the crumbling plaster.

All around is the bloody chaos of a standoff that, in the end, claimed 12 lives.

The wall above the officers is smeared in streaks of blood and riddled with bullet holes. At their feet is a bag used by the gang to carry their loot.

In the same room lie three dead robbers - one at the feet of the dead cops, one on the floor and one on his back on the bed. Five guns are scattered around the bedroom.

The photo albums also contain pictures from the postmortems, detailed ballistic diaries, chilling glimpses inside other rooms at 54 Mordaunt Street, the areas surrounding the house, and money bags stolen from the Honeydew Pick n Pay and recovered in the hideout.

The much-awaited trial of the "Jeppestown Massacre 13" began on Wednesday after a two-day delay.

State prosecutor Joanie Spies read out the 23 charges and was met with defiant pleas of "I'm not guilty" on all counts from all accused.

This means the trial - set down until the end of March - is likely to run its full course.

The 12 men and one woman face various charges of robbery, murder, attempted murder, and being in possession of unlicensed and illegal firearms.

All but one accused exercised their right to remain silent. Zinto Mqunu claimed he had gone to the house to visit a sangoma and was not involved in the robbery.

Ballistic evidence has shown that at least 27 firearms were used in the siege - including an AK-47 - and that more than 110 shots were fired by the seized weapons.

The real figure - including shots fired by police outside the house - is closer to 300.

On Wednesday, 11 handguns and an AK-47 were laid out as evidence. The service pistols of Schoeman, Seaward, and inspectors Victor Mathye and Frikkie van Heerden were also presented.

Two witnesses were called to give evidence: a woman robbed outside the Pick n Pay and a supervisor on duty on that bloody Sunday.


Joanne Brown, who has an artificial leg, had parked in the disabled-parking spot outside the supermarket. As she opened the door, "a chap" appeared and ordered her to hand over her handbag.


She later saw a man with the bag - covered in "trinkets, teddy bears and silly things" - making a getaway. She spotted a red Honda Ballade and claimed it was used by the gang. The car was then linked to the scene in Jeppestown.

Sarah Marumole - a supervisor at the Pick n Pay since 2002 - was six months pregnant when the gang struck.

She said she worked with one of the accused, Mary Maleke, who is thought to be the insider at the store.

Marumole attended an identity parade at C-Max prison (where 10 of the accused are kept) but said she was too scared to point out anyone.

On Wednesday, she was given a set of photographs and picked out one of the faces.

None of the widows of the slain police officers were in court.

CHEATED: Widows Leonie van Heerden and Nadia Seaward listen to proceedings in the Johannesburg High Court yesterday. Van Heerden earlier recounted events that led to her husband being killed .Pic: ALON SKUY. 04/11/2008. © The Times.Save & Share
THE widow of a policeman murdered in the Jeppestown massacre wept as she described how difficult it was for her to explain their father's death to her young children.

"Every day of their lives [my children] miss their father. We do not go to bed without my son asking why they shot his dad," said Inspector Leonie van Heerden in the Johannesburg High Court yesterday.

"I am angry. They took away the best thing in my life."

The widow, also a police officer, has spent many days in court listening to the proceedings.

"We had dreams, things we wanted to go through together. I'm missing my best friend's company, his jokes, everything," she said.

Her husband and partner in the Roodepoort police dog unit, Inspector Frederick "Frikkie" van Heerden, was one of the four police-men killed during the bloody Jeppestown shootout in June 2006.

She, too, was at the scene, but survived.

The police officers had driven to Jeppestown after a tip-off that an 18-man gang was hiding in a house in the area.

Eight robbers died during the five-hour gun battle with the police.

Van Heerden was one of the four witnesses called by the state to testify in aggravation of sentence against the 12 accused who were recently convicted for charges including murder, attempted murder, robbery with aggravating circumstances, and illegal possession of firearms and ammunition.

She had previously said that she would not be able to testify against her husband's killers because she was still traumatised and was undergoing counselling.

Yesterday, however, she was the first of the witnesses to testify.

"I remember that Inspector Victor Mathye was shot in both legs and was down on the kitchen floor. I remember that he fired shots to keep the people inside the house at bay and that he was using his last breath to fire the shots," she said.

"I was bleeding from the head and a person came out of the house, looked at me, laughed and ran off."

Van Heerden lost her composure when she was asked to describe how the incident affected their daughter: "Her father was everything to her," she said.

ý Accused Emmanuel Mweli, 29, appealed for leniency because he had "already spent two years behind bars" and was "still young".

Judge Ratha Mokgoatlheng dismissed an application that it be recorded that three of the accused felt that he had pre-judged them and had not properly considered their evidence.

Eleven of the 13 accused in the Jeppestown massacre were on Thursday given four life sentences each by the Johannesburg High Court for the murders of four policemen.

Judge Ratha Mokgoatlheng also gave them 40 years each for other crimes relating to the incident, including the killing of eight others who were thought to be members of the gang.

As sentence was past, family members of the slain policemen wept and hugged each other before leaving the court room.

Fanie Schoeman, brother of slain police Sergeant Gert Schoeman, said "I'm happy that it's over, but we can't say that justice has been served, because they took my brother away.

"The message that the judge gave to other criminals is a good one... Police are there to protect us, it doesn't matter what background you come from, you should know what is right and what is wrong," he said
with tears in his eyes.

Most of the accused were fathers of very young children.

The "prime mover" behind the Pick 'n Pay robbery in Honeydew which eventually led to the bloody shoot-out in Jeppestown two years ago, Senzo Mweli, 29, was sentenced to 20 years imprisonment. He was also sentenced to five years for attempted murder, which would run concurrently with the 20-year sentence.

The policemen were killed in the shoot-out at a house in Mordaunt Street, Jeppestown, on Sunday June 25, 2006 in the aftermath of the
robbery.

The father of Schoeman said earlier that he looked forward to closing a painful chapter of his life.

Provincial Commissioner for Gauteng, Director Govindsamy Marimuthoo,
said the sentencing was settling for all members in the police force.

"We welcome the sentencing, and will continue in the fight against crime...our fallen heroes have paid the ultimate price...it is a great relief to know that those responsible for these atrocious acts have received justice."

Mokgoatlheng said that the background the accused came from should not be an excuse to the events that occurred.

"People cant be allowed to take the law into their own hands, because we have the capacity to think what is right and what is wrong...what this court can't understand is why people should kill in cold blood."

He said that while he understood that the financial situation of the accused was very dire, it was no excuse even if all eleven of the 12 accused were all first time offenders.

"We come from a very painful past, but I try to understand why such a waste of life happens for money...speaking as a black judge, I must say, that in South Africa today, a black man can rise and become what he wants to be."

He said that South African policemen were the bastion of the constitution and society would not accept the killing of a policeman while on duty.

"No civilised society should live like this...people should be allowed to go shopping on a Sunday morning without the fear of being shot and killed."

"My brother is not okay. I spoke to him three days ago. He is very sad. I am very sad about this situation too, I love him very much," said Mchunu.

In response to Mchunu's testimony that police had shot at the robbers first, Mokgoatlheng said that the police were just doing their job.

"The police were following you criminals, it is not correct that the police shot at you first, they were just doing their work, and they should be allowed to do their work," he said.