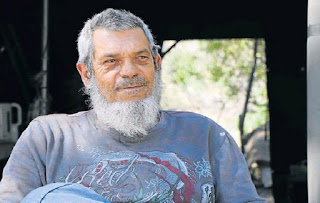 The incarcerated leader of a whites-only, Orania-style settlement in the Klein Karoo, who was arrested two weeks ago, had ties to notorious paedophile Gert van Rooyen and his lover Joey Haarhoff, according to the son of the enclave’s head.
This emerged after a Weekend Post investigation into the shady past of Jaqui Gradwell, 56, who, along with a former wife, came into contact with the Van Rooyen and Haarhoff circle when they were much younger.
Van Rooyen and Haarhoff have recently been back in the news with investigators digging up a KwaZulu-Natal beach looking for clues about six missing girls dating back to the 1980s.
The police are also following up on leads on the possibility of a link between Gradwell and Van Rooyen.
Gradwell, the leader of the Eden Project, and girlfriend Etrezia “Trish ”Weber, 28, are still in custody after being arrested for allegedly being in possession of a stolen firearm and dagga. They are due to appear in the Ladysmith Magistrate’s Court again on Tuesday.
Gradwell – who has at least eight convictions, including for robbery and theft – changed his name from Johan Kobus Pretorius to Jaqui Gary Gradwell prior to 1994. He has been married at least six times and allegedly had an affair with his daughter-in-law.
Since his arrest, Gradwell has also become a suspect in an unrelated investigation by a specialist police unit in Oudtshoorn. Van Rooyen, who kidnapped and is believed to have killed six children between 1988 and 1989, shot and killed Haarhoff before turning the gun on himself as police closed in on them in January 1990.
Forensic investigators were recently hopeful that the answer to the Van Rooyen cold-case mystery – unsolved for nearly three decades – was buried beneath the sand at Blythedale Beach near Ballito. But they abandoned the search after finding nothing.
Gradwell’s son, Johan Ettiene Pretorius, told the Weekend Post there were several links between his father and mother and Van Rooyen and Haarhoff, stretching back to when his parents were in a foster home together as children.

Carel Boshoff, President of the Orania Movement’s response to this article.  Click here for the original ruling.