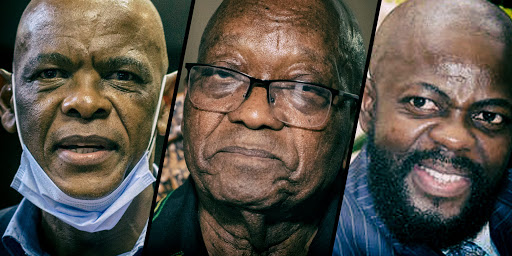 South Africa suffered an insurrection attempt this week with two provinces, KwaZulu-Natal and Gauteng, disabled and national fuel and food supply lines disrupted. It is the first such campaign organised and orchestrated on social media and shows the potency of the medium. Just over 38 million South Africans are now on the internet and 25 million of us are on social media.

More than 70 people have died, at least 1,354 people have been arrested and 12 ringleaders are being investigated for a political campaign that has spiralled out of the control of its firestarters.

The first arson “protests” at the weekend, in which 35 trucks were torched on the N3, which links Gauteng to KwaZulu-Natal and is South Africa’s food and fuel route, started the darkest week of anarchy in the country’s recent history. Information has now emerged that this was planned by intelligence operatives and other cadres loyal to Jacob Zuma. The former president is jailed at the Estcourt Correctional Centre for contempt of court and his loyalists want him out.

“These are people with experience of running operations,” said Deputy State Security Minister Zizi Kodwa at a briefing on Wednesday. News24 reported that Zuma’s leading spymaster and the former ambassador to Japan, Thulani Dlomo, is one of 12 ringleaders being investigated by the police’s Crime Intelligence and by state intelligence as being the architects of a political campaign of which they have lost control.

The SA National Defence Force contingent deployed to end the violence was on Wednesday increased to 25,000 soldiers as the government battled to bring the situation under control: overnight, 208 more incidents of looting were reported – 52 in Gauteng and 156 in KwaZulu-Natal.

While Gauteng appears to be coming under control, the looting in Durban is being live-streamed as police prove either unable or unwilling to control the mayhem, which Mayor Mxolisi Kaunda said had already cost the port city R15-billion in the week following Zuma’s jailing.

The insurrection was organised on social media once the 12 masterminds had crafted the strategy of chaos, according to senior ANC and intelligence sources who were interviewed by Daily Maverick on condition of anonymity. The chat messages in the graphic below have been filtered off social media and reportedly come from groups on WhatsApp and Telegram where the insurrectionists organised.

The common theory now is that the truck burnings were relatively easy to organise because of the long tail of renegade MK groups (organised in new movements) active in the sector. They have been campaigning against foreign truck drivers and are regarded as being behind arson attacks on truckers for at least the past three years. Police have promised to clamp down but have not substantially dealt with the killings of more than 200 truckers since 2018.

In November 2020, two truckers died and 30 trucks were set alight in anti-foreign driver campaigns allegedly by the All Truck Drivers Forum.

From the N3 campaign, the plan was to attack symbols of “White Monopoly Capital”, which explains the looting of warehouses and more than 200 malls. Specific chains were targeted.

Now the ANC GOVERNMENT AND THEIR Cadres wants to blame WHITE MONOPOLY CAPITAL AND RACISM FOR THE ANARCHY - DESTRUCTION OF SOCIETY - PLUNDER!

THEY SHOULD RATHER BLAME THEIR OWN TOP BRASS FOR THE STATE CAPTURE AND CORRUPTION.

HOW LONG WILL IT STILL TAKE FOR THE STRUCTURES ON THE ANC TO IMPLODE?

THE CITIZENS SHOULD NOW STAND TOGETHER AND VOTE THIS SCOURGE OUT OF OFFICE.