Stephen Grootes | 8 months ago
JOHANNESBURG – The South African Revenue Service (Sars) said on Monday it's demanding R10 million in damages from its former spokesperson Adrian Lackay because his actions in publishing confidential tax information may lead to some companies refusing to pay tax.Lackay has confirmed he's being sued jointly by Sars and its Commissioner Thomas Moyane after writing a letter to two Parliamentary committees.In that letter, he claims that British American Tobacco (BAT) may have broken the law and that the truth about the alleged rogue spy unit has not yet been told.Sars said it wants R10 million from Lackay and is demanding another R2 million for Moyane.The organisation’s Luther Lebelo said what Lackay did could have hugely expensive implications for the revenue service. “Once they lose confidence in our capacity to hold confidential information about them and they decide not to pay tax, that can go into billions of rands, which will not impact him as a person, but it will create debt for South Africa and the poor of this country.”But going to court could be risky for Sars.It may give Lackay an opportunity to insist that he be given a chance to tell his full side of the story in public. That may mean Moyane has to respond to Lackay’s claim that he didn’t properly investigate the alleged rogue spy unit.  (Edited by Tamsin Wort)

An explosive affidavit has revealed a smouldering corporate tobacco war between BAT & its competitors.

Barry Bateman | about 23 hours ago
PRETORIA – A former policeman turned spy, and now whistleblower, has accused a global tobacco giant of dirty tricks and running a campaign to bully competitors out of the cigarette market.The man, who cannot be identified yet, has claimed that British American Tobacco (BAT) allegedly hired spies, paid off the authorities and has corrupt government officials on its payroll.

The details are contained in an affidavit prepared by the Fair-Trade Independent Tobacco Association (Fita)  in a complaint to the Competition Commission.
Fita represents local, small-scale cigarette producers.

Dubbed ‘Operation Knysna’, the campaign was allegedly approved by BAT and executed by a company called Forensic Security Services (FSS), which apparently deployed a network of more than 170 spies.
Barry Bateman | a day ago
PRETORIA – In an explosive affidavit that has exposed a smouldering corporate tobacco war, a former spy has turned against his multinational handlers and laid bare alleged global espionage and sabotage. Eyewitness News has exclusively obtained a sworn statement in whichBritish American Tobacco (BAT) and Forensic Security Services (FSS) are accused of an unlawful campaign to discredit BAT’s competitors.

The document has been prepared by the Fair-Trade Independent Tobacco Association (Fita) which represents small, local tobacco producers, in a complaint to the Competition Commission.

BAT controls about 85 percent of the South African cigarette market.
A former policeman-turned-spy - and now whistle blower, has described in detail how BAT allegedly hired a network of spies across the country and paid off law enforcement officials to disrupt competitors’ business operations.

The man’s identity is being withheld until formal criminal charges have been lodged.
He says their campaign involved close work with the authorities, to ensure continued raids on businesses and product seizures.

The man says the rationale was to create the perception in the marketplace that the competitor's products were not worth keeping because of the risk of loss.

He says he was told by BAT and FSS managers, whom he’s identified by name and with supporting documentation, that the only way to suppress the competition was to falsely suggest that they were selling and marketing their cigarettes unlawfully.

Fita’s Sinen Mnguni has confirmed the veracity of the affidavit while BAT declined to comment.
(Edited by Tamsin Wort)

Faizel Patel | 8 months ago
JOHANNESBURG - Another British American Tobacco (BAT) vehicle has been robbed, this time in Langlaagte west of Johannesburg.
It’s understood the driver was making a delivery at a shop on Wednesday morning when he was confronted by two armed men.
The police’s Katlego Mogale said, “When he proceeded to deliver the cigarettes to the garage next door and as he approached the garage he was confronted by two suspects who pointed a firearm at him and took the cigarettes, as well as his keys and his jacket. They went back to the police station where they took the vehicle and fled the scene.”
This is the second BAT vehicle to be targeted in a matter of days.
On Tuesday, an armed gang travelling in three cars robbed another of the firms vans on Peter Road in Honeydew.

US plane impounded in Zimbabwe; body and cash found on board 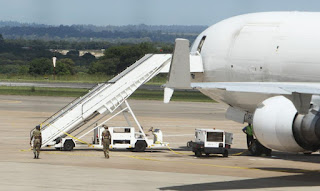 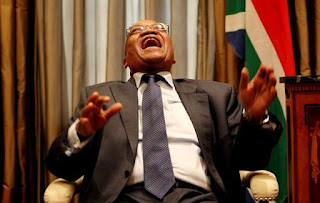 HARARE, Zimbabwe (AP) — Zimbabwean aviation authorities impounded a U.S.-registered cargo jet, a senior official said Monday, after a dead body later believed to be a stowaway and millions of South African rand were found on board.
The Herald, a state-run newspaper, reported that the MD-11 trijet was traveling from Germany to South Africa "with millions of rands." At today's exchange rate, 1 million rand is worth $62,500.
Authorities here learned the money belonged to the South Africa Reserve Bank, the country's central bank. Police planned to issue a statement later Monday.
The plane had landed in Harare for refueling, said Civil Aviation Authority of Zimbabwe general manager David Chawota. He said the jet, registered with Western Global Airlines, was impounded at Harare airport on Sunday. A website says Western Global Airlines is based in Estero, Florida. The airline on Monday said the cargo belonged to the South African Reserve Bank and the dead body belonged presumably to a stowaway. Zimbabwe police said it was still investigating the matter.
The crew did not know there was someone else on the plane, according to a police officer, who insisted on anonymity because he is not authorized to speak to the press. It appears from photos on social media that the dead person had sneaked into the plane's landing gear, which severed his arm when it contracted, causing blood to splatter onto the fuselage and arousing the suspicion of the ground crew when the flight landed here.
In a response to AP queries, Western Global Airlines said it didn't have the identity of the dead person, believed to be a stowaway.

Zimbabwean Armed Soldiers patrol around a United States registered cargo plane at Harare Internation …
"The aircraft is leased to Network Airline Management, a longtime customer based in the UK, and the shipment consignee was the South African Reserve Bank. This particular flight was from Germany to South Africa, we are told for the South African government. During a routine fuel stop in Zimbabwe, a body was found in the lower compartment. The body is presumed to be a stowaway who may have entered the airplane during a previous stop. The situation is currently under review," the airline said in an e-mail response to The Associated Press.
South Africa's ambassador to Zimbabwe, Vusi Mavimbela, confirmed that the cargo belonged to the South African Reserve Bank but refused to divulge further details, saying he was still liaising with the Zimbabwe government to resolve the matter. He refused to divulge the nature of the cargo or the amount of money that was in the plane.
Zimbabwe police spokeswoman Charity Charamba said investigations are still underway.
"Our officers are on the ground investigating the case. We are working hard to get the identity of this dead person but I will only give clearer details when investigations are complete. The body has been taken for tests by experts," she said on Monday night.
The crew, according to the Herald, includes two Americans, a South African and a Pakistani.
___
Associated Press Writer Jennifer Kay in Miami contributed to this report.

If one takes these three articles collectively then, SOUTH AFRICA IS ONE HELL OF A CORRUPT COUNTRY
Enough reason to have Zuma impeached now?
SURE!
IS THE SA TREASURY LAUNDERING MONEY ABROAD?
THE SANDF COMMANDER-IN-CHIEF WILL NOW EXIT THE CHAMBER!
WHO HAS THEIR FINGERS IN THE GEPF TILL?
* THE ZULU FAMILY TREE