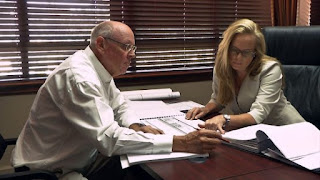 
In what must be one of the most spectacular corporate captures in South African history, Connie Myburgh and Dominique Haese, respectively the chairman and CEO of the Nova Property Group, have taken full control of the rescue vehicle of the erstwhile R4.5 billion Sharemax investment scheme.

Moneyweb can confirm the two directors, who are romantically linked according to several sources, acquired 100% of the voting rights of the company after stripping the other voting shareholders of their voting rights.

Subsequent to obtaining full voting control, Myburgh approved maximum increases of 10% for the directors for the next three years at a recent AGM, something shareholder activist Theo Botha “has never seen before”.

He added that Nova is an ideal case for a class-action suit.

The Nova shareholding structure is complicated, with only the seven founding shareholders, who received their shares for free, holding any voting rights. According to this structure, each of the four directors held around 23% of the vote. The balance was held by three other individuals.

The 2 000 Sharemax investors who elected to receive Nova shares in lieu of debentures, have no voting rights.

In what may seem to be a case study in corporate capture, Myburgh and Haese annulled the voting rights of the other shareholders. This was triggered by an attempt led by Dirk Koekemoer (property director) and Rudi Badenhorst (financial director) to remove Myburgh and Haese from the board.

Myburgh and Haese foiled this attempt and instead engineered the resignations of Badenhorst and Koekemoer as directors.

From left to right: Rudi Badenhorst, Dominique Haese, Connie Myburgh and Graeme Polson. This photo was taken last year at the debenture holders’ meeting where Badenhorst claimed the listing proposal of the Nova Property Group was “daylight robbery”. It was the first public sign of significant infighting among Nova board members.

Badenhorst and Koekemoer signed a shareholders’ agreement that reduced their shareholding in the company and stripped their remaining shares of all voting rights. It is not certain why they signed this agreement.

Moneyweb has also learnt that the voting rights of the remaining minority shareholders were also rescinded.

This sequence of events left Myburgh and Haese with 100% of the voting rights in the company. According to Moneyweb calculations, their collective shareholding in Nova increased from around 46% to 60% in Nova.

Moneyweb sent questions to all the shareholders but did not receive a response.

During a recent, poorly attended AGM in Pretoria, an abrasive and abrupt Myburgh acknowledged changes to the shareholding structure but refused to divulge any details, citing a confidential shareholders’ agreement.

Myburgh refused to answer a question on whether he and Haese obtained complete voting control of the company: “I am not going to discuss that. That is part of a confidential shareholders’ agreement.”

He later added: “I will not be cross-examined by you [the author] any further. I regard this matter as closed… The shareholding has been adequately and correctly disclosed. The company is owned by its shareholders and that is the end of the matter.”

Myburgh questioned the facts Moneyweb put to him but did not offer to provide an alternative version. He also did not respond to questions relating to the shareholding structure that were emailed to him after the AGM.

This refusal to disclose changes to the shareholding and voting rights follow the lengthy court battle between Moneyweb and Nova after Myburgh fiercely tried to keep the original shareholding secret. The Supreme Court of Appeals eventually found in Moneyweb’s favour and it was only then revealed that the founding shareholders had received 96% of the company without paying a cent.

Moneyweb will be lodging a new application to access the latest shareholder registers in terms of Section 26 of the Companies Act in due course.

These events show how Myburgh completed his and Haese’s corporate capture of a company.

Myburgh’s involvement started when he penned the original Section 311 Scheme of Arrangement that was designed to “rescue” the R4.5 billion that about 18 000 mostly elderly pensioners invested in Sharemax.

Here are the key developments in this process:

In 2011, Myburgh penned the original Section 311 Scheme of Arrangement after the collapse of Sharemax. This saw the transfer of all former Sharemax properties from investors to Nova.
During this process, Myburgh became chairman of the Nova board.
Myburgh, Haese and the remaining five founding shareholders collectively received 96% of the shares in Nova, as well as 100% of the voting rights, without paying a cent.
Myburgh had a stranglehold on the company from the outset and, together with Haese, controlled 46% of the vote.
In 2017, Badenhorst and Koekemoer, supported by some of the minority voting shareholders, tried to have Myburgh and Haese removed from the board. Myburgh and Haese managed to foil this attempt and later engineered Badenhorst and Koekemoer’s resignations. Their shareholding was reduced and they lost the voting rights attached to their remaining share.

This effectively means Myburgh and Haese have full voting control and own 60% of the 20 remaining Sharemax properties, which according to the latest financial statements are valued at nearly R2.5 billion. Total assets amount to R2.87 billion, while total liabilities stand at R2.62 billion.

In response to these developments, shareholder activist Botha said Nova represents an ideal case for a class action. “Where is our judicial system in all of this? Where are our A-grade attorneys who would take this on risk and take on the directors? This is a prime class-action case because people have lost their rights. There is significant value in the properties of the company and this should be returned to investors.”

The AGM also saw Myburgh, who was appointed as proxy for all shareholders with voting rights, approve all normal and special resolutions. The most controversial was the approval of salary increases of 10% per annum for three years.

The remuneration structure of the non-executive directors that was approved at the Nova AGM.

This is on top of the exorbitant salaries the directors already receive, and the approval of financial statements that were significantly restated due to the previously massive overvaluation of two properties, and the filing of two reportable irregularities (RI) at the Independent Regulatory Board for Auditors (Irba).

In response to Moneyweb questions, Botha said he had never seen anything like this. “Investors should ask why the board would want increases in advance. We don’t know where inflation is going. It doesn’t make any economic sense for shareholders to approve this. An increase of 10% is well above inflation and a 30% increase over three years makes no sense for shareholders to approve.”

Write-down of R1.3 billion valuation of Villa and Zambezi

In response to a question, Myburgh said no disciplinary action was taken against any of the directors related to the restatement of overvalued properties and the unlawful composition of Nova’s audit committee.

Moneyweb earlier raised these transgressions with auditor BDO. In reaction BDO launched an extensive investigation into the allegations, which resulted in the restatement of the financial statements.

This restatement includes a write-down of more than R1.3 billion of an overvaluation of the Villa and Zambezi properties in a process where an independent valuer’s valuation was seemingly ignored.

BDO also reported another reportable irregularity with Irba in relation to the unlawful composition of Nova’s audit committee. This was rectified by the appointment of five new directors to the board, after which the IR was withdrawn.

Myburgh said in response to a question related to the audit committee: “All the years that position was expressly explained and dealt with every single year and at every single AGM as to why the situation existed. The reasons for this were accepted. This situation was rectified mid last year (2017).”

He denied that this was only done after it was found to be in contravention of the Companies Act. “Your facts are incorrect… I am not going to elaborate. I don’t want to elaborate. You can speculate if you so wish. The position was rectified in consultation with the auditors.”