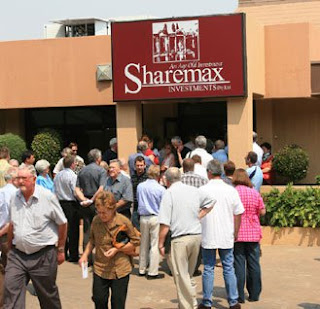 JOHANNESBURG – The Sharemax rescue scheme has resulted in directors Dominique Haese and Dirk Koekemoer strengthening their control of investors’ assets.
This is because two independent directors of the syndication companies, former judge Willie Hartzenberg and Sharemax investor Koos Maartens have not been appointed directors of the new company formed as part of the Sharemax rescue scheme.
The new public company, Nova Property Group Holdings, owns the entire Sharemax property portfolio. Company records show that it has just three directors: Haese, Koekemoer and accountant Rudi Badenhorst.
Two of these directors, Haese and Koekemoer, were involved with the old Sharemax structure. Thus, the Nova board is dominated by directors who are arguably responsible for getting Sharemax investors into the pickle they currently find themselves in.
Elderly Sharemax investor Koos Maartens was appointed to the boards of the various Sharemax boards after the resignation of economist Dawie Roodt.
Maartens tells Moneyweb that he was asked by Haese whether he wished to continue his involvement with Sharemax as a director of Nova. He expressed his wish to do so.
However, Maartens says that he has not received any invitations to attend board meetings.
Maartens says his efforts to get an explanation for this apparent “freezing out” have been unsuccessful.
It seems reasonable for Sharemax investors to ask why they lack representation on the Nova board.
Haese has been involved with Sharemax for several years. Haese was Sharemax’s financial director before being promoted to managing director in October 2010 after the resignation of founder Willie Botha. Haese’s father-in-law, Waldemar Gustav Haese, has performed a highly controversial valuation on Flora Centre. The Flora Centre’s auditors, ACT Audit Solutions, have accused WG Haese of lacking independence.
Furthermore, the independence of Nova’s third director, accountant Rudi Badenhorst, has been questioned. Badenhorst has long shared his business premises with Sharemax Investments. He was also one of the directors to bill investors hundreds of thousands of rand for consulting fees as part of the rescue process. (See: Sharemax: Big bucks for syndication directors.)
At last count Badenhorst had earned R600 000 for consulting services billed at R1 500 an hour. A further amount of R500 000 had been budgeted for his services.
In contrast, Badenhorst’s co-independent directors, Hartzenberg and Maartens were paid considerably less for their efforts. Hartzenberg stands to make R240 000. For Maartens an amount of R76 000 was budgeted.
Maartens’s predecessor, economist Dawie Roodt, did not receive any payment for his services as an independent director.
Judge Hartzenberg does not share Maartens’s concerns about the composition of the Nova board.
Hartzenberg says he would not wish to serve as a director of Nova, even if asked, because it would take up too much of his time.
Hartzenberg says he is confident that the board is in competent hands.
“I have no problem with Dirk and Dominique,” says Hartzenberg. “I can tell you, if there’s someone who knows what’s going on it’s Dominique. I am impressed with that woman and I’ve worked with many people in my time. I’m not scared that she’d be pulling wool over the eyes of investors.”
Hartzenberg also had a good word for corporate lawyer Connie Myburgh, who has been the architect of the Sharemax rescue scheme. “If it was not for Connie Myburgh, the whole thing would have been liquidated.”
Hartzenberg says that the press “has a warped idea” of what happened with Sharemax. “The press gave the impression that there was fraud and that sort of thing, which there was not.”
At the time of writing Haese had not responded to e-mailed and telephonic requests for comment.
Posted by Tango at 5:23 AM