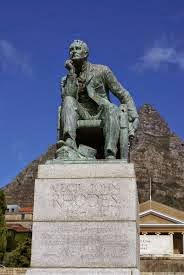 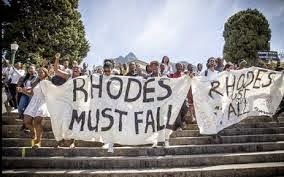 SADC Chairperson and President of Zimbabwe Robert Mugabe delivers his speech during the Farewell Gala Dinner hosted by the outgoing President of the Republic of Namibia H.E. Mr Hifikepunye Pohamba and Mrs Pohamba at the Safari hotel in Windhoek. (Photo: DoC)


“We in Zimbabwe had forgotten about Cecil Rhodes until South Africa said it has his statue in Cape Town, where he was the minister of the Cape and mischievously wanted to also take control of Zimbabwe,” said Mugabe. ”We have his corpse, you can keep his statue,” he added, causing South African President Jacob Zuma and the twenty cabinet ministers from both governments to break in laughter.
Mugabe arrived in South Africa on Tuesday on an official visit, accompanied by ten of his cabinet ministers and his wife Grace. Rhodes’ statue, situated within the campus of the University of Cape Town, has been the subject of national dialogue after students staged protests, demanding that it be removed.
This was followed by protests and the defacing of other statues of colonialists and apartheid-era figures across the country. Rhodes is buried at the “View of the World” hill in the Matopo district in Zimbabwe, reportedly in keeping with his final will. Mugabe said Zimbabwe was looking after Rhodes.
Read more: SA and Zimbabwe to work on migration issues
“I don’t know what you want us to do with him…do you think we should dig him up? …but perhaps his spirit may rise again. We have decided to keep him down there,” he said.
He is accompanied by his wife, Grace, and government officials.


Mugabe, who is on a state visit at the invitation of President Jacob Zuma, was welcomed by South African Minister of International Relations and Cooperation Maite Nkoana-Mashabane after his plane touched down at Waterkloof Air Force Base in Pretoria.

BOB YOU SHOULD KNOW.
YOU MASS MURDERER!!
May hell be too hot for YOU!
Posted by Sonny Cox at 8:09 AM