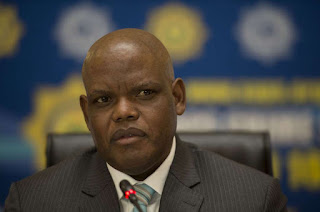 Acting National Police Commissioner; Lieutenant General Khomotso Phahlane speaks during a media briefing about the SAPS and Agri SA partnership to curb farm killings on…
UPDATE: IPID issues warning against Phahlane
Johannesburg – Acting police commissioner General Khomotso Phahlane is expected to make a warning statement on Wednesday, in relation to a charge of defeating the ends of justice after being summoned by police watchdog IPID.
Following Jackie Selebi, Bheki Cele, and Riah Phiyega, Phahlane is the fourth consecutive top cop to be implicated in wrongdoing during their term of office.
News24 has reliably learnt that the charge relates to an Independent Police Investigative Directorate probe into an upmarket house Phahlane had built in the exclusive Sable Hills Waterfront Estate, north of Pretoria.
It is understood that IPID has been interviewing witnesses to gather information on how Phahlane, a career policeman, had managed to afford the construction of a residence said to be worth about R8 million.
The charge of defeating the ends of justice relates to Phahlane’s alleged contact with witnesses after he learnt that IPID was probing his property, say sources close to the investigation.

Cash payments
The IPID investigators are also probing alleged cash payments to a contractor totalling R700 000. The money was allegedly stuffed into plastic shopping bags and transported in the boot of a car.
It is understood that Phahlane will make the warning statement at IPID’s offices in Pretoria on Wednesday.
The original docket against the acting police commissioner was opened by forensic investigator Paul O’Sullivan in January this year. O’Sullivan alleged that the bond Phahlane registered for the property is valued considerably lower than the value of the house, which Phahlane built in 2011 and 2012.
According to O'Sullivan, the massive townhouse covers 803 square metres of under-roof space. The cost of building the house is estimated to have been between R4.7m and R5.8m, said the forensic investigator.
“The bond would have yielded cash of about R1.58m. Phahlane would have to explain the source of funds of about R4.7m,” O’Sullivan said.
In March, O’Sullivan distributed an e-mail among a number senior police officers – including Phahlane – that included details about Phahlane’s property.
“Stop me if you can,” O’Sullivan had dared the officers before quizzing Phahlane on the origins of the money for his house.
“Phahlane, I wanted to ask you, where the money came from to build this mansion in Sable Hills Waterfront Estate? I’ve got a copy of the title deeds, and bond details. As I see it, you had spare cash of between R3m and R5m. Did you win the lottery?” O’Sullivan said in the e-mail.
Threats
Less than a month later, at the start of April, O’Sullivan was arrested by the Hawks at OR Tambo International Airport after he boarded a flight bound for London. He was charged with contravening Section 26B of the Citizenship Act. In the subsequent trial in the Kempton Park Magistrate’s Court, O’Sullivan’s lawyers mentioned the e-mail as a possible reason for his arrest.
News24 has also seen a copy of an SMS which had allegedly been sent to one of the IPID investigators and O’Sullivan, which contains threats against those involved in the probe.
“This is a warning to u. we r aware that u workin fo a big foreign spy paul salivan who is funded by his masters. . . u must stop now. we know where u stay and ur family. U must either choose to die with him,” reads the SMS.
Phahlane did not answer his phone or react to a text message from News24.
Brigadier Mashadi Selepe, Phahlane's spokesperson, said the department respects the mandate of IPID to investigate any member of the South African Police Service irrespective of who they are.
"The Acting National Commissioner welcomes any investigation on any allegations and matter against him conducted within the confines of the law to enable the testing of any such allegations. It is unfortunate that such investigations and/ or allegations if any are conducted through the media with the sole aim of causing harm and damage to the reputation and integrity of the Acting National Commissioner," Selepe said.

The South African Police Service has suspended a senior whistle-blower who conducted a single-minded crusade for acting national police commissioner General Khomotso Phahlane to be probed for corruption. Colonel Sandragasen Moonsamy, the head of East London’s local criminal records centre, was formally suspended on Tuesday. By SALLY EVANS for AMABHUNGANE.

The SAPS refused to provide clarity on the circumstances. But before his suspension this week, Moonsamy made a sworn statement in support of a criminal docket opened by forensic investigator Paul O’Sullivan against Phahlane in February.

Moonsamy’s statement is contained in a docket lodged with the Independent Police Investigative Directorate.

O’Sullivan first sent an electronic copy of his allegations to Ipid’s executive head, Israel Kgamanyane on February 25. He also copied three police generals on the email.

The following day he delivered a lever-arch file to Ipid’s office, which contained his and Moonsamy’s statements plus several annexures.

In his statement, O’Sullivan accuses Phahlane of “corruption, money laundering and/or racketeering”.

Moonsamy’s allegations of impropriety against Phahlane include claims linked to a 2011 chemical supply tender for the police forensic division, which Phahlane headed before his appointment as acting national commissioner in October last year.

Moonsamy states that since informing former police commissioner Riah Phiyega of his concerns in 2014, his allegations have not been tested and Phahlane has not been held accountable.

“In view of the fact that the massive abuse of public funds runs into excess of R50-million, I request a thorough police investigation into the supply of chemicals, the procurement process, the disposal of [expired] chemicals and Phahlane’s role in protecting the supplier,” he says.

“Whilst I do expect to be victimised for opening this docket, I request that no stone be left unturned in finding the truth.”

Moonsamy received the notice of intention to suspend on April 4, the same day that O’Sullivan appeared in court on immigration-related charges.

AmaBhungane was unable to reach Moonsamy on his cellphone and his office said he was on leave.

But a police source with knowledge of the matter said Moonsamy faces charges for engaging the media and an “insolent” request to Parliament’s police portfolio committee in December to investigate Phahlane.

In his statement, O’Sullivan explains that Moonsamy made contact with him last year after becoming “disillusioned with what he saw going on in the police and in particular the conduct of Phahlane”.

“It was clear that Moonsamy had exhausted all of the lines of communication to raise the complaint in terms of the Protected Disclosures Act and … I agreed to help him, but requested a lot more information. He then made a U-turn and said that he was now about to get some feedback.”

When other allegations apparently implicated Phahlane, O’Sullivan in turn reached out to Moonsamy.

Sources close to the police investigation of O’Sullivan believe his two-year crusade against powerful police figures including Phahlane, the head of detectives Vinesh Moonoo and Hawks boss Berning Ntlemeza, prompted his arrest.

O’Sullivan has publicly accused the three generals of fraud, corruption and money laundering. He was arrested on April 1 on minor immigration-related charges while aboard a plane bound for the United Kingdom.

Before his arrest O’Sullivan had sent an email to Phahlane, Moonoo, Kgamanyane and several other senior officials informing them of a press briefing he intended staging in London. His email said:

“I shall be calling a full-blown media conference in Whitehall, London, the purpose of which will be to tell the world that SA has been taken over by a corrupt regime of Zupta-led criminals and that the world must now boycott SA in every way possible, just like they did during Apartheid, until the people run the country again.”

“Zupta” is a reference to the alleged relationship between president Jacob Zuma and the controversial and influential Gupta family. O’Sullivan continued:

“I shall be departing here on 2016-04-01. Be like the apartheid government and stop me from leaving, thereby giving a global voice to my campaign, to stop the corruption that is tearing this country apart.”

In the same email, which was blind-copied to several media outlets, O’Sullivan claimed to have “just come from a top-secret meeting” during which “an amount of R20-million” was pledged, “to be used to stop the Zupta crooks (including the infiltrated and criminalised South African Airways/National Prosecuting Authority/Hawks SA Police Service) in their tracks.”

Some close to the investigation believe it is these words that may have sparked the treason charge police apparently want to to bring against O’Sullivan.

Moonsamy’s suspension may also be part of a wider attempt to stifle allegations against top cops. In December he asked Parliament’s police portfolio committee to carry out a “comprehensive investigation” of Phahlane. Somewhat prophetically, he said:

“If what I am saying is untrue, then I am willing to put my career of almost 30 years to an end.”

Ramahlaha accused Ntlemeza of protecting a former Polokwane police captain between 2012 and 2014, allegedly because he was the boyfriend of Ntlemeza’s daughter.

When he read that Ntlemeza had been appointed acting head of the Hawks, Ramahlaha, like Moonsamy, reached out to O’Sullivan for help. (O’Sullivan’s public profile grew after he successfully exposed former police commissioner Jackie Selebi of corruption.)

“We believe the affidavit is meant for jumbling up, cheap propaganda, blackmail [and] making confusion, and it is contentless.”

Responding to amaBhungane’s questions about Moonsamy’s suspension this week, Mulaudzi said: “We truly do not find a reason why we should dignify the questions related to the report and your sources with a response.”

In a follow-up response on Friday, Mulaudzi said:

“Colonel Moonsamy has been one of your sources. You therefore cannot make it the department’s problem if you are unable to locate him. You never obtained permission from the department to liaise with him and thus it cannot be our issue if he is not available to feed you with what you have in common.

“Matters relating to suspensions of any employee cannot be peddled through the media; such remains an employer and employee relationship-related issues.”

This is not the first time Moonsamy has been under fire over his pursuit of allegations against Phahlane. In December 2014 the police’s criminal record and crime scene management division head, Major General Vincent Khunou, sent a warning about him to the heads of all criminal record centres and local criminal records centres. He wrote:

“It has come to the attention of this office that the Commander of the Local Criminal Record Centre: East London has embarked on a process to source official information and records from members and LCRC offices in pursuance of his own personal agenda/mission without following due processes and complying with the relevant prescripts.

“The desperation and witch-hunt evidence by the individual simultaneously taking up the roles of a whistle blower, complainant, investigating officer, auditor, representative of others and presiding officer cannot be tolerated. This unwanted behaviour, which is destructive and unprofessional will be dealt with …”

“Failure to comply with this instruction will result in disciplinary steps against the member and the commander of the respective LCRC office,” Khunou threatened. DM

This story was produced [provided] by: