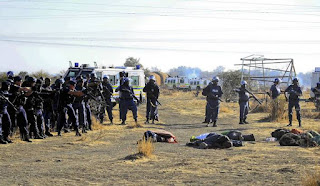 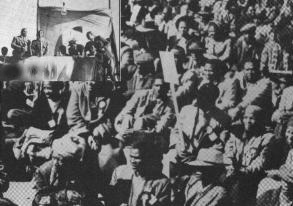 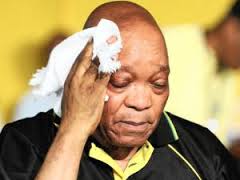 For two years, the Marikana Commission of Inquiry looked at the deployment of the police to Marikana and who was responsible for the death of 44 people. For three months, the country has waited for its findings and recommendations. Days before the report is due for release, President Jacob Zuma gave his view, a disaster for the public's trust in his ability to lead and act to ensure justice. By GREG NICOLSON.


Despite attacks in Parliament, a court challenge, and public outcry, it was Napoleon Webster who caused the latest public relations disaster for the presidency on Marikana. With his beard and camouflage fatigues, Napoleon is the Economic Freedom Fighters' Heckler-in-Chief in Gauteng. When Cyril Ramaphosa appeared at the Marikana Commission, Napoleon led the chorus, calling the deputy president a murderer, sell-out and “buffalo head”.
On Tuesday, Zuma was waxing on the potential need to reinstate Apartheid policing tactics if protests aren't peaceful, a headline on any other day, before Napolean did his thing, according to City Press. “Otherwise the culture of Apartheid that used violence to suppress people will have to be looked at again, and I don't want it. We don't want the police who must use violence because they are stopping violence,” Zuma said at the Tshwane University of Technology.
Napoleon: “They killed people in Marikana!”
“And those people in Marikana had killed people and the police were stopping them from killing people,” Zuma quipped.
In August it will be three years since the Marikana massacre. The Commission of Inquiry sat for two years and the president has had its report for almost three months. There's been no justice for any of the 44 people who died in that week of August 2012 (although hundreds of miners were arrested and allegedly tortured) and their relatives wait for Zuma to release the Marikana Commission's report, which he promised to make public at the end of June.
His comments were criticised for showing bias towards the police while country waits for the inquiry's version.
The presidency tried to spin Zuma out of the knot on Wednesday. “All the deaths should be equally condemned by all without being selective, as all lives are important and all families equally lost their loved ones in the tragic and painful incidents that occurred at Marikana,” Zuma said in a media statement condemning accusations he condones the deaths of the 34 people killed on 16 August.
The damage had been done. “These reckless remarks demonstrate that the president does not care about the families who had their loved ones ripped from them by a trigger-happy SAPS on that fateful day,” said the DA's Dianne Kohler Barnard. “Of even greater concern is the heinous remark Zuma made about Apartheid-era South Africa and using it as a threat by which to quell social dissatisfaction,” she added. “This is the same attitude that got us in[to] this Marikana mess in the first place.”
EFF spokesperson Mbuyiseni Ndlozi said Zuma was releasing the report in piecemeal fashion and further traumatising the relatives of those who were killed. “This means Jacob Zuma has singlehandedly found the Marikana workers guilty of murder and thus condoned a death sentence on them before even their side of the story was heard. Zuma is saying it is correct that his police massacred workers in Marikana and we must accept a massacre as an act of crime prevention.”
The presidency struggled to defend its boss. It's easy to say all the killings should be condemned and in the past Zuma has expressed sympathy with all the victims and their relatives. But while the country is on edge, waiting for the release of the Marikana report, on Tuesday he was not neutral, nor sympathetic, not diplomatic. The presidency offered no valid explanation for what the president may have intended to say, so his statement, made while he only he has access to the report, suggests he believes in the simple view: “Those people in Marikana had killed people and the police were stopping them from killing people.”
In essence, his comments reflect the SAPS argument at the Marikana Commission, supported by characterising the miners as muti-crazed and hell-bent on violence. And yet police killed 37 of the 44 people who died that week. On Monday 13 August, the SAPS fired teargas (no one wants to own up to giving the order) into a crowd they had agreed to escort and in the chaos they caused the police killed three miners while the miners killed two cops. On 16 August, they rushed to implement a poorly developed plan, which even they expected might lead to deaths, failed to sufficiently use non-violent weapons, and killed 17 people at scene one, where they delayed medical attention for the injured.
Then, with bodies down, they continued the operation, pursuing miners to scene two, killing another 17, where evidence suggests many were killed in cold blood. Police commanders then congratulated their troops for representing the best of SA policing. During the inquiry the SAPS hid evidence from the Marikana Commission, pinned their hopes on a clearly unreliable “Mr X”, and distanced themselves from cops who wouldn't toe the line.
Those are just the footnotes. Before even discussing allegations that Lonmin used Cyril Ramaphosa to pressure ministers to get the police to end the strike with force, or the transcript that links the hasty implementation of the SAPS operation to political fears that Julius Malema would intervene, it's simplistic, even offensive, given what's now known, to simply say, “Those people in Marikana had killed people and the police were stopping them from killing people.”
Yet as the president appears to think the return of Apartheid-style policing should be an option, it's not surprising. Whatever the findings and recommendations of the Marikana report reveal, more than ever, it's now difficult to believe the Zuma is the man to act on them. DM
Photo: South African police check the bodies of striking mineworkers shot dead at the Wonderkop informal settlement near Marikana platinum mine, Rustenburg, South Africa, 16 August 2012. EPA/STR

THE PRESIDENT'S SPEECH PUT NOTHING ON THE TABLE.

THE SAPS POP'S DIVISION WAS BLAMED FOR THE MASSACRE.

ALL POLITICIANS WERE EXONERATED FROM ALL BLAME!

EVEN THE VICE PRESIDENT WAS PRESUMED INNOCENT OF ALL ACCUSATIONS!

THE MAN WHO HAD THE MOST BLOOD ON HIS HANDS....?

GOD SAVE SOUTH AFRICA!
Posted by Sonny Cox at 4:22 AM