"DON'T" Get your e-tag: Sanral

No Fear No Favour No ANC corruption tolerated any longer........ 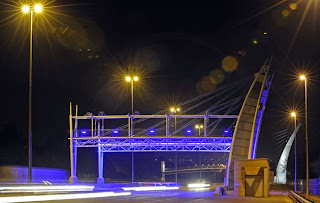 Motorists should get ready for e-tolling on Gauteng highways by obtaining e-tags, the SA National Roads Agency Limited (Sanral) said on Sunday.

"With the introduction of e-tolling on some highways in Gauteng set to start in the near future... motorists [should] get their e-tags and register for payment without delay," Sanral spokesman Vusi Mona said in a statements.
"Motorists should not be confused by court actions currently underway," he said, adding that e-tolling in Gauteng was no longer legally disputed.
"The legality of open road tolling in Gauteng was settled by the Constitutional Court when it lifted, in September last year, the interim interdict preventing Sanral from implementing e-tolling in Gauteng."
The e-tolls have been criticised by a number of organisations, including the Congress of SA Trade Unions.
The civil society group, Opposition to Urban Tolling Alliance (Outa), has fought a lengthy court battle to prevent the implementation of e-tolling.
The High Court in Pretoria granted Outa leave to appeal its dismissal of the civil group's application to have e-tolling scrapped, and this will be heard by the Supreme Court of Appeal in Bloemfontein in September.
Mona said the e-tag, would be fitted to a windscreen, and would automatically deduct the toll fee when the vehicle passed beneath an overhead toll gantry.
"Open road tolling means that there will be no plazas on the road which slow down traffic or result in long queues."
Mona said there were already more than 40,000 e-toll account holders using e-tags at N1/N4 Bakwena toll plazas.

Away with ANC fraud and corruption.
Away with e-Toll and its misguided evils!
We shall stand up and oppose all corruption in SA from now on.
Let Japan finance Zuma's crumbling mistakes and shortcomings!