WITHOUT FEAR OR FAVOUR FROM THE GUPTA'S OR ZUMA'S......

This was among the submissions made by chartered accountant Gerhard van der Westhuizen, who testified about numerous irregularities related to contracts between the state-owned company and Neotel. 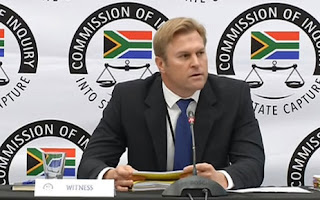 A screengrab shows Gerhard van der Westhuizen at the state capture commission of inquiry on 27 May 2019.

Barry Bateman | about 5 hours ago
PRETORIA - The state capture commission has heard how Transnetpaid a Gupta-linked shelf company R36 million for one day of work.
It emerged at the commission that the job had already been completed by a Transnet employee. This was among the submissions made by chartered accountant Gerhard van der Westhuizen, who testified about numerous irregularities related to contracts between the state-owned company and Neotel.
Van der Westhuizen said he led and concluded negotiations with Neotel on 13 December 2014 but later discovered a contract with a company called Homix, whose services commenced a day earlier.
Evidence leader Veruschka September confirmed the timeline with the witness.
“To an extent that R36 million was paid for services contracted from Homix on 13 December 2014. Would it be correct to say that R36 million would relate to but one day of work?”
Van der Westhuizen answered: “It does appear that way, yes.”
September closed proceedings with the question being explored during these hearings related to Transnet.
“Whether or not a parallel system was indeed at play at the time that these transactions took place, a parallel system was augmented by the higher echelons of the organisation to corroborate the outside of the procurement process to facilitate these transactions.”

EWN
COMMENTS BY SONNY
NEOTEL INFORMED THEIR CUSTOMERS ABOUT THREE MONTHS AGO THAT THEY WERE GOING OFF THE GRID ON 27 MAY 2019. THEY EXTENDED THE DATE TO 30 JUNE 2019.  THEY ADVISED CUSTOMERS TO FIND ANOTHER PROVIDER.
WHO STOOD TO GAIN FROM THEIR RELATIONSHIP WITH PRASA OR TRANSNET?
ZUMA AND HIS GUPTA CRONIES WERE EATING FROM THE SAME POT!
NOW ZUMA PLEADS INNOCENT AND BANKRUPT..... AND PENNILESS.
What a legacy for a defaulted president to leave.
WILL THE NEW PRESIDENT CYRIL RAMAPHOSA BE ABLE TO GET SOUTH AFRICA OUT OF THIS NOSE DIVE!
LET THIS THIRD WORLD COUNTRY REJOICE ONCE MORE.