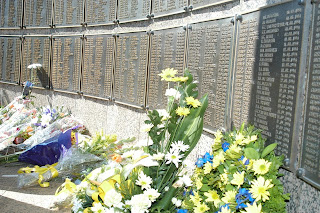 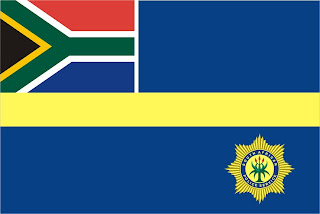 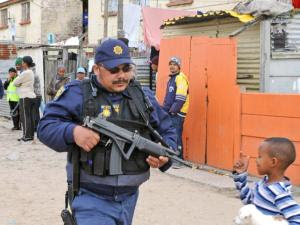 The deaths of seven policemen in Cape Town in the past month have caused grief among their colleagues – as well as anger and a determination to hunt the killers down.

A high-ranking officer told the Cape Argus that absenteeism was at an all-time low as members wanted “to be there for one another”.

While Police Minister Nathi Mthethwa and Community Safety MEC Dan Plato trade political accusations over policing in the province, the men and women patrolling the streets are anxious and determined.

The shooting of Sergeant Bafundi Mdlalo at his Mitchells Plain home on Monday night brought to four the number of police officers killed in Cape Town in one week.

A firearm was stolen from Mdlalo’s home after he was shot.

thethani
A picture of Constable Dumile Thethani gazes out at mourners at a memorial service. Picture: Henk Kruger
CAPE ARGUS
Earlier that day, Mthethwa had spoken at a press briefing at the Mitchells Plain police station about attacks on police officers.

* Last Monday, Constable Dumile Thethani, 38, was shot in the head and died when he and his partner were ambushed by two gunmen during a routine crime prevention patrol in Nyanga. The partner was shot in the leg and is recovering in hospital.

* On Sunday evening, Constable Lungiswa Depha, 34, was shot dead by a motorist who had slammed into his police vehicle on Spine Road in Khayelitsha. Depha was on duty.

* About an hour later, Sergeant Landile Yengo was shot dead.

Three other officers have been killed in the Western Cape since July 25. Provincial police commissioner Lieutenant-General Arno Lamoer has acknowledged that it has been the bloodiest month yet for the police during his tenure, which began in September 2010.

Police have not made any arrests.

The Cape Argus spoke to three police officers who work on the ground or in managerial positions in crime-ridden areas. The interviews were conducted on the condition of complete anonymity – officers may be impeached for commenting to the media without permission.

“There is a definite fear, a questioning feeling of ‘Who will be next?’,” said a high-ranking officer.

“Members are reaching for bulletproof vests en masse. In the past no one bothered – they just lay in storage. Some members are patrolling in larger groups, they no longer feel safe doing so in pairs. It all shows that there is a new awareness and tension in the air. Today I will be driving in a marked police vehicle, but I am not armed. I must admit the context of the recent murders makes me slightly nervous.”

An officer working in the Nyanga cluster told the Cape Argus that he was constantly aware of his vulnerability – whether commuting to work or on the job and even at home. Merely being in possession of a service pistol made officers targets for criminal gangs who wanted to increase their arsenals, he said.

The high ranking officer said yet the “anger, determination and camaraderie” felt among the ranks of police in Cape Town arguably overshadowed fears for personal safety.

“It’s incredible. There has been a dramatic decrease in the number of officers calling in sick, for instance. I hear that this is especially true at Harare police station in Khayelitsha (where Depha and Yengo were stationed) since the murders on Sunday.

“Many officers are angered by the audacity of a criminal who will attack a sergeant at his home. They want to be there for one another, they want to bring the murderers to book and they want to continue serving and protecting the public – in spite of the tough circumstances at the moment. This is about more than just a job.”

He had seen fellow officers weeping at their desks on Tuesday. “Others go quietly to the bathroom and cry because they have lost friends. Everyone’s trying to keep strong, but at times the loss is too overwhelming. They do not understand or really care about all the cheap politicking around this issue.”

Cape Town mayor Patricia de Lille has said she will work to ensure that money becomes available to reward informants in cases of murders of police officers.

De Lille said that the killing of Sergeant Bafundi Mdlalo in Mitchells Plain on Monday night clearly indicated criminals were targeting police officers throughout the city.

“We must all do everything we can to ensure that we can build safer communities. I appeal to anyone with information that could assist the police in arresting the individuals behind these attacks (to come forward),” she said.

The murder has drawn widespread condemnation, with the council of the Cape Law Society saying its councillors “support the hardworking members” of the police and “encourage them to continue to serve the people of South Africa”.

All condemnations were accompanied by condolences to the families and colleagues of the fallen police officers.