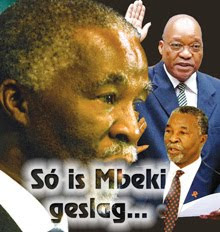 The rise of Jacob Zuma to South Africa's presidency was an "astonishing achievement", according to United States diplomatic cables released by WikiLeaks. Zuma became South African president in May 2009 after a bruising battle for the leadership of the African National Congress with former president Thabo Mbeki, who was forced by the ruling party to step down in late 2008.

"Zuma's rise to the pinnacle of South African politics at the same time that serious questions about his character were headline news is an astonishing political achievement in itself," said a diplomatic cable sent by the US Embassy in Pretoria before Zuma was sworn in as president on May 9 2009.

Zuma was the subject of a long corruption investigation. Graft charges against him were dropped in April 2009.

US diplomats saw the South African president as adept at political survival and an accomplished political tactician who used his populist support to his advantage.

"Throughout the most difficult times of the past few years, Zuma came across as reluctant to draw first blood, only displaying subtle determination to take the fight to his aggressors. This is consistent with a leader that is aware of his own strengths -- smart power," the cable said.

'Worries'
But diplomats also raised concern about Zuma's ties to the left -- the South African Communist Party (SACP) and the Congress of South African Trade Unions (Cosatu), which are in a governing alliance with the ANC and helped him rise to power.

"His close association with the ideological left of the ANC alliance has raised some worries about the impact on economic policy by close Zuma allies in the SACP and Cosatu," the cable said.

Since taking office, Zuma has maintained most of the government's pro-business policies.

Mbeki felt that a Zuma presidency would cause a sea-change in politics.

"Mbeki believed that a Zuma presidency would be a disaster for South Africa and would split the ANC".

Mbeki, who drew widespread criticism for failing to tackle an Aids pandemic in his country, is described in another diplomatic cable released by WikiLeaks as "thin-skinned" and "hypersensitive".

"US government officials meeting with Mbeki should be prepared to recognise his defensiveness and high sensitivity to criticism," the cable said. -- Reuters

Thank God for a Free Press.

Otherwise we would never have found out how clever our statesmen were!