"Several senior members have left or have been sidelined following the departure of Willie Hofmeyr." 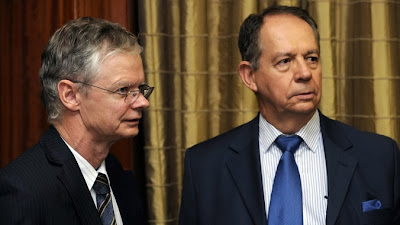 Willie Hofmeyr, who was ousted as the SIU head, and Willem Heath,who quit the position after just a few weeks. A new appointment is expected soon. (Russell Roberts, Gallo)
The country’s prime corruption-busting force, the Special Investigating Unit (SIU), continues to be racked by the internal divisions that paved the way for the departure of its former boss, Willie Hofmeyr, in December 2011.

The SIU has been under the acting leadership of Nomvula Mokhatla for more than a year, following the brief appointment of former judge Willem Heath, who was forced to resign after giving a newspaper interview that suggested he might take a politically partisan approach to the unit’s work.

Despite a promise by Justice Minister Jeff Radebe that an appoint­ment would be announced by the end of February, President Jacob Zuma must still make his choice known.

According to a presentation by Hofmeyr to Parliament in October 2011, between R25-billion and R30-billion of government’s annual procurement budget was lost to corruption. Fighting corruption is central to the unit’s mandate.

The leadership vacuum has also fuelled the racial and professional conflicts at the unit that dogged Hofmeyr, according to internal documents seen by the Mail & Guardian and sources from the unit who spoke on condition of anonymity.

By the time a new head is appoin­ted, it may already be too late to undo the damage months of uncertainty has caused the unit. It has seen the departure or sidelining of a number of those perceived as loyal to Hofmeyr, including the former projects director Peter Bishop and the former corporate director and spokesperson Marika Muller.

According to some sources, central to the SIU’s current problems is the reinstatement last year of the unit’s business support head, the firebrand Miseria Nyathi.

Nyathi successfully negotiated her return to the unit following her dismissal for refusing to undergo a lie-detector test after she was charged with submitting false overtime bonus claims under Hofmeyr’s watch in 2011.

Nyathi denied the charge and further claimed that her refusal to take a lie-detector test was based on concerns she had about Hofmeyr’s motives.

She was also charged with secretly co-operating with members of the National Education, Health and Allied Workers’ Union (Nehawu), which was engaged in a protracted battle with Hofmeyr over what the union alleged was racial bias in the management and staffing practices at the unit.

Last week the Democratic Alliance claimed that Nyathi was being considered for the unit’s top job, following a meeting she allegedly had with Radebe about it.

The minister’s spokesperson, Mthunzi Mhaga, declined to respond to questions about the alleged meeting or its purpose. He said: “Insinuations on the meetings with Ms Nyathi are not worth a response.

“The matter [of a new SIU head] is with the presidency and they have indicated that a decision on the appointment will be made soon and communicated accordingly.”

Despite these assurances, the fallout from Nyathi’s battle with Hofmeyr over her dismissal and the issue of Nehawu’s crusade appears to have continued to fester.

Racial allegations
Nehawu has been a vociferous champion of Nyathi’s since her suspension and has continued to make allegations about a so-called “campaign” aimed at “discrediting non-whites, especially blacks” in the unit.

In a June 2012 letter to Nehawu members at the SIU, the union’s branch secretary for the unit in KwaZulu-Natal, Bongani Mpungose, wrote that allegations made last year that Nyathi received R2-million in back pay following her reinstatement were “made without investigation since it had already [been] concluded because she is black”.

“The force behind this campaign is the same executive committee who are discrediting the acting head of the unit, Adv Mokhatla, as they create an impression that their father, the former head of the unit [Hofmeyr] was running this organisation well.”

Nehawu said it “will support and protect Adv Mokhatla for the bold decisions which she made to reinstate our comrades who were punished for being Nehawu members and [for being] pro-transformation.”

Sources in the SIU said that Nyathi’s return to the unit had created an atmosphere of “fear and insecurity”. They said Nyathi had “purposefully targeted” those who were involved in investigating the disciplinary case against her.

The public protector had been sent three complaints by SIU employees relating to the management styles of both Nyathi and Mokhatla, they said, and internal grievances had also been lodged against Nyathi.

The SIU would not confirm or deny this.

Mokhatla reinstated Nyathi despite legal advice she received that advised that the reinstatement would be improper.

The legacy of Nyathi’s return to the unit and the alleged influence of Nehawu over the SIU’s executive committee appears to have affected the unit’s ability to carry out its mandate, with one source claiming the unit has been consumed by the Nyathi faction’s “campaign of revenge”.

Several senior SIU officials involved in investigating Nyathi’s fraud case have either resigned or have been demoted since she returned.

Where SIU members have been demoted, their positions have allegedly been taken up by people perceived as loyal to Nyathi. In one case, Brian Chitwa, who was made acting head of the SIU’s internal integrity unit in October last year, was allegedly investigated for leaking confidential information to Nyathi while she was suspended.

Nyathi has also allegedly “verbally abused” officials who handled her disciplinary matter. According to a SIU source, Nyathi called one of these officials and “screamed” at the person and said their “integrity cannot be trusted”.

Internal processes
Nyathi allegedly also threatened a senior legal official and accused the official “of fabricating evidence” to be used against her in the disciplinary matter.

This appears to have happened in the wake of Nyathi’s appointment to a newly created position, the acting head of internal audit, governance and risk, besides her position as head of business support.

SIU sources said other senior mem­bers had been sidelined by Nyathi, who had allegedly included junior staff in meetings that the more senior employees should have attended.

According to an SIU official, Nyathi had “slowly taken control of the SIU”.

In a response to questions put to the SIU, the unit said: “The questions relate to internal SIU business, which includes employees’ personal information and disciplinary matters that are extremely confidential.

“The SIU will therefore not respond to these questions, which are aimed [at] nothing but tarnishing [the] image of the unit and senior management.”

Dave Lewis, the executive director of Corruption Watch, said the SIU had a very important mandate and set of powers and the uncertainty over the leadership “has just enormously weakened the unit. Any weakening of the unit is really very bad as the figures on corruption are just gigantic.” 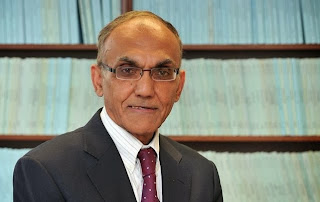 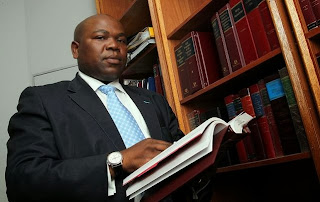 EDITORIAL: The NPA grasps at its own fiction

Zuma says he will appoint NPA head by end August


PRESIDENT Jacob Zuma on Friday announced the appointment of permanent heads at the National Prosecuting Authority (NPA) and the Special Investigating Unit, beating a deadline by one day.

The Council for the Advancement of the South African Constitution gave Mr Zuma until the end of August to make the appointments or face a Constitutional Court action to force his hand.

Mr Zuma announced that Mxolisi Nxasana had been appointed National Director of Public Prosecutions, with effect from October 1.


Mr Nxasana currently practises as an attorney and has a wealth of experience in criminal litigation. He has also held senior positions in the legal profession including chairman of the KwaZulu-Natal Law Society.

The new head of the Special Investigating Unit (SIU) is advocate Vasantrai Soni (SC), also with effect from October 1.

Mr Soni has 25 years’ experience and played a crucial role as chief evidence leader in the Jali commission of inquiry into corruption in prisons in South Africa, Mr Zuma’s statement said.

Sophy Moipone Dinah Noko has been appointed director of public prosecutions for the jurisdictional area of the KwaZulu-Natal division of the high court, with effect from September 1.

President Zuma expressed confidence that the three appointments would lend credibility, integrity and stability to the institutions they will lead.