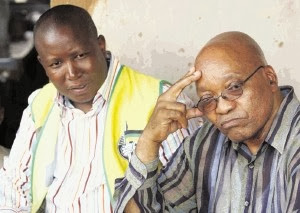 Johannesburg - The Hawks have laid a criminal complaint against an NPA official for the dropping of corruption charges against suspended police crime intelligence head Richard Mdluli, City Press reported on Sunday.

National Prosecuting Authority spokesperson Bulelwa Makeke confirmed to the newspaper that a complaint of defeating the ends of justice had been lodged against specialised commercial crimes unit head Lawrence Mrwebi.

She told City Press the docket was "under consideration" and that an investigation into the matter still needed to be concluded.

City Press reported that a Hawks investigating officer involved in the criminal case against Mdluli laid the complaint.

The case against Richard Mdluli can be seen as a dry run for the DA's bid to have corruption charges against President Jacob Zuma reinstated.
Richard Mdluli. (Gallo)
General Richard Mdluli appears to be a dangerous man. The suspended crime intelligence boss, it will be remembered, is accused of abusing his position at the apex of one arm of the "secret state" to acquire and dispense personal benefit and political favour.

Mdluli allegedly had discounts due to the Secret Services Account transferred for his own advantage, presided over the appointment or promotion of friends and family as covert agents, and wrote to President Jacob Zuma, making allegations of political plots and offering a pledge of loyalty.

Nor should one forget the unresolved 1999 murder of his one-time love rival, Oupa Ramogibe, or the untested evidence of Mdluli's involvement in threats against Ramogibe's family and associates.

But the court battle finally beginning next week in the North Gauteng High Court in Pretoria is about much more than Mdluli's future. It also highlights a much wider danger than whether he returns to control one of the peaks of covert state power.

Next Wednesday, the nongovernment watchdog Freedom Under Law will attempt to have the courts step in to enforce accountability in one of the most profound tests of our constitutional architecture.

The state exercises its coercive power mainly through the police and prosecutions system, which is why the checks and balances on these institutions are so important, and why the individuals wielding executive authority in these areas must be beyond reproach.

The separation-of-powers doctrine suggests that the executive, the judiciary and the legislature must be careful not to stray into each other's domains, which means that the courts will not easily substitute their own decisions for those who are duly authorised to make those decisions, such as prosecutors and police commissioners.

But that deference depends on two caveats: such decisions should not be subject to undue pressure, and decision-makers must, when required, be prepared to justify the decision in significant detail.

The discipline of justification is the core of the constitutional framework, of the very power of the courts. Without it, the Constitution is merely a set of ideals.

And it is not easy. The discipline of justification imposes a significant, if necessary, bureaucratic burden.

It requires the state to keep good records; it requires officials to know, understand and have regard for the changing landscape of laws and regulations that govern their conduct; and it requires that officials demonstrate this when legally called upon to do so, including disclosing all records relevant to that decision.

Resistance to the culture of justification is understandable – and not only when officials are trying to cover up wrongdoing. If the bureaucracy degrades, if the state begins to fail, officials find it harder to resist challenges to doing good things as well, such as going after tax cheats or deporting foreign criminals.

The courts face a tough choice: lower the bar for the state, or uphold constitutional obligations that may embarrass the state and add significant strain to the tension between the executive and the judiciary.

The Mdluli case is an important test of judicial resolve: almost a dry run for the Democratic Alliance bid to have the courts review the decision to withdraw corruption charges against Zuma.

It should be recalled that the Zuma administration set the scene for this showdown with a series of politicised appointments, including those of Mdluli himself, of the acting national director of public prosecutions, advocate Nomgcobo Jiba, and of the head of the Specialised Commercial Crime Unit, advocate Lawrence Mrwebi, the man who ordered the prosecution of Mdluli on corruption charges to be withdrawn. And then, the acting-commissioner, Lieutenant-General Nhlanhla Mkhwanazi, dropped disciplinary proceedings and reinstated Mdluli in March 2011 after a meeting with Police Minister Nathi Mthethwa.

He later attributed this decision to authorities "beyond" him.

The judgment, which also ordered national police commissioner Riah Phiyega to restore disciplinary proceedings against Mdluli, was made on Monday by Judge John Murphy in the North Gauteng High Court in Pretoria.

Mdluli was suspended amid charges of fraud and corruption, and charges relating to the murder of his former lover's husband.

An inquest cleared him of any involvement in the murder.

The National Prosecuting Authority (NPA) later withdrew charges of fraud and corruption. He was reinstated, but was suspended again in 2012 pending Freedom Under Law's (FUL) court application.

Political analyst Richard Calland told the Cape Town Press Club on Thursday: "Justice John Murphy's judgment in the Mdluli case is extremely important for its extrication of the law.

"If Justice Murphy's approach is affirmed, then the outcome of the review case from the Democratic Alliance of Zuma is likely to go the same way, which means the charges will be reinstated."

Calland was referring to the DA's application to access "spy tapes", transcripts, and other documents that relate to a 2009 NPA decision to drop corruption charges against Zuma.

Last month, the North Gauteng High Court in Pretoria ordered acting national director of public prosecutions Nomgcobo Jiba to lodge a copy of the tapes with the registrar of the court within five days.

Zuma lodged an application for leave to appeal the following day, and this was subsequently granted by the South Gauteng High Court in Johannesburg.

Calland said that should charges eventually be reinstated against Zuma, the ANC might deem it inappropriate to have him in a leadership position and might manufacture a "relatively graceful departure".

He said Zuma might resist such a move and this could make him vulnerable.