Call for Phiyega, Mthethwa to resign 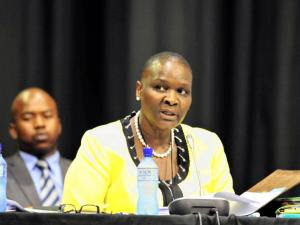 “(We) call on (them) to...do the honourable thing - resign from their positions,” the union's leader Mpho Kwinika said in a statement.

“We have been calling for a judicial commission of inquiry into the SA Police Service simply because there is no leadership and management in the police.”

Sapu was reacting to the outcome of an audit released by the police ministry on Sunday, which found that 1448 police employees had committed crimes.

In a statement, Mthethwa said the audit -into how many current police employees had criminal records - had been going on for two years. Mthethwa said the next step was for Phiyega to decide what action to take.

Sapu said the “so-called report” was not credible.

“The lack of credibility in the audit report comes from the fact that even its findings are inaccurate... We have been calling for its terms of reference to be made public,” said Kwinika.

“Sapu would like to challenge the minister and the national commissioner to be frank and honest about the criteria used to determine this figure, the process, and its accuracy.”

The union questioned whether the figure included those employees who were given fines in court, and those found not guilty. Sapu said it did not condone ill-discipline or illegal acts, but wanted clarity on the report.

“We want to reassure the public that as much as we acknowledge that there are few rotten elements within the SAPS... thousands of men and women in blue are people of great integrity,” Kwinika said. - Sapa
Posted by Tango at 2:26 AM