Mandla Mandela and the chamber of secrets 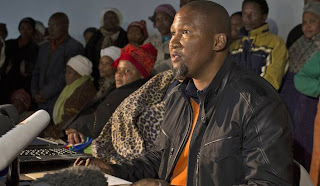 A DYING ANC LEGACY
Of course Mandla Mandela was not going to take it lying down. When the Mthatha High Court ruled against him on Wednesday, thereby allowing the remains of Nelson Mandela’s three children to be returned to Qunu, it was obvious that Mandla would not simply let it go. On Thursday he hit back at his family with a vengeance, slashing open deeply buried family secrets and questioning the legitimacy of those he feels are ganging up against him. And so the ignoble saga takes another sordid twist, making a mockery of the name revered around the world. It seems the one person constantly at Mandela’s side, who is not a Mandela, knows the true value of that name. By RANJENI MUNUSAMY.

Will Nelson Mandela have to wait for his children while he waits alone in the soggy ground?

He should have opted for CREMATION!!

THEN NOBODY WOULD BE ABLE TO HAGGLE OVER HIS AGED BONES.

What has the ANC actually achieved since 17 April 1994?

'ANC is dying under weight of corruption' 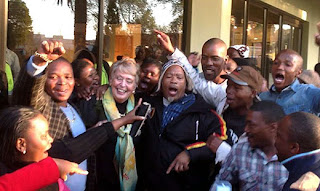 JOHANNESBURG – One of the former ANC councillors who allowed the Democratic Alliance (DA) to retake the Tlokwe Municipality believes people won’t vote for the ANC next year because of corruption surrounding the party.

David Kham was one of the 14 people expelled by the ANC earlier this week after they allowed the DA to take control of the municipality, twice.
On Tuesday, 29 councillors from all parties including the ruling party voted unanimously to return the DA's Annette Combrink to the position of mayor.
The municipality’s former mayor Maphetle Maphetle failed to deal with damning forensic audit findings of corruption, and the DA used this as part of its campaign to vote the ANC out.
Kham says he doesn’t need the ANC to survive.
“We’ve got nothing to lose. Remaining outside the ANC doesn’t take our lives away. We will remain with the revolution and leave the ANC”
He said the party is dying under the weight of corruption through scandals like Nkandla and Guptagate.
Kham now appears to be involved in efforts to create a new political formation.
The ANC’s Ishmael Mnisi said the removal of Maphetle is irregular.

“The mayor together with the other members, including chief whip, were not present in that meeting. We however note and will further investigate the matter with our legal representative.”
(Edited by Gia Kaplan)