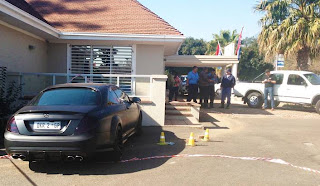 This week, a visiting Australian journalist asked ALEX ELISEEV why South Africans are always seduced by tales from the underworld. Well… it’s because we have remote-controlled cars with hidden gun barrels that try to assassinate shadowy characters like Radovan Krejcir, before bursting into flames. Do we need another reason? (All photos by EWN)


Radovan Krejcir has not exactly led a quiet, low-key life since arriving in South Africa six years ago. His opening act was getting arrested on an Interpol red notice while using a fake passport to sneak into the country while (the story goes) wearing a flimsy disguise.
Since then, he has been arrested for robbery and insurance fraud and continues to fight off attempts to extradite him back to the Czech Republic, where he has been convicted of a string of crimes. His name has also cropped up in just about every major underworld murder (Lolly Jackson, Cyril Beeka, Uwe Gemballa, etc.) or scandal. He denies any involvement and has managed to shake off all of his criminal cases.
But nothing so far has come close to what happened outside his Bedfordview office (located inside a gold and diamond exchange) on Wednesday morning.
This is Krejcir’s version of events.

He arrived at work at around 11.30am and parked in his usual spot. He climbed out of his matte black Merc and, while talking on his cellphone, moved away from the car and towards the front entrance. Barely a meter into his walk, he heard what sounded like a loud explosion. Then “firecrackers” began to go off, or at least that’s what he thought until he saw that the side of his car was riddled with holes. His colleague ran out to help get him inside the building while a car in the parking lot exploded into flames.
Krejcir is unharmed. “I’m a lucky man,” he says. But he has just survived what is clearly an assassination attempt. Upon further investigation, it turns out the car parked nearby, a red VW Polo, was in fact a weapon. Its back number plate blew off to reveal a dozen gun barrels aimed directly at where Krejcir parks each and every day. Although it seemed like bullets were being fired, the more likely scenario is that the car was modified with home-made shotguns, which sprayed pellets in his direction.
Amazingly, the VW Polo was empty all along, and Krejcir’s theory is that it was being operated by someone lurking nearby.
“I suspect it was like somebody had a remote control and when he saw me from a close distance he pressed the remote control and the bullets came out.”
Once the assassin realised the job had been bungled, he probably fled the scene.
A few hours later, Krejcir was happy to give media interviews, in between dealing with the swarm of police detectives who – for once – were not raiding his house or inviting him for a ride downtown.
Is he shocked or traumatised? He doesn’t seem to be. I ask him what he makes of this sensational, bizarre plot to kill him.
“All my life is like James Bond stuff,” he answers in a thick accent. “So it’s usual stuff for me… It’s how I live my life.”
There’s one other question: who would want to kill him?
“Nobody knows. I don’t have any…” he pauses for a moment. “Suspect... And even if I have some idea, I’m not going to tell you.”
I ask him about the timing, considering George Louka – a suspect in the Jackson murder – has just lost his legal bid to avoid being extradited from Cypress to South Africa. I ask whether that could have anything to do with it.
“No, I don’t think so,” he replies.

Police confirm that the VW Polo was reported stolen in April and that a case of attempted murder has been opened. The car seems to have been positioned the previous night, but by whom, and why, remain a mystery.
For the rest of the afternoon, theories (possibly conspiracy theories) flood social networks and radio talk shows. Was it a turf war or a cunning plan by Krejcir himself to help avoid going back to the Czech Republic? Was his car armoured? Did the other car self-destruct or did it burn by accident? Could this have been a local hit or was it international (more specifically, European)? Who would have this kind of money, imagination and patience? There’s no denying it, South Africans do love a good crime story.
As for the Krejcir near-assassination… there are no easy answers. The only thing that everyone agrees on is that Johannesburg is definitely not boring.DM
Alex Eliseev is an EWN reporter. Follow him on @alexeliseev

A scene from a movie shoot?

Or a ruse for political Asylum?

AMATEUR TO SAY THE LEAST!

ARE ALL THE GREEK COMING HOME TO ROOST?

Krejcir is playing on public sympathy.
Posted by Sonny Cox at 2:06 AM