Al Qaeda in the Arabian Peninsula's second-in-command was killed by a drone strike in Yemen, an insurgent group official claimed on Wednesday. 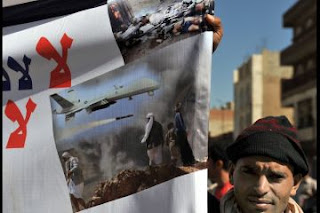 A man protests against US drone attacks in Yemen near thee home of Yemeni President Abdrabuh Mansur Hadi, in the capital Sanaa, on Jan. 28, 2013. (STR/AFP/Getty Images)


A high-ranking commander of Al Qaeda in the Arabian Peninsula was killed in a reported drone strike in Yemen, the insurgent group claimed Wednesday.
Said al-Shehri, considered by US authorities to be a significant Al Qaeda operative, had been released from Guantanamo Bay prison after Pakistandelivered him to the United States in 2002.
Years later, after he was returned to Saudi Arabia in 2007, he escaped to Yemen and eventually became AQAP's second-in-command.
It's important to note that Shehri has been reported killed before. Last January, Yemeni officials said the commander had died during a military operation in Saada province on Nov. 28, 2012.
Senior AQAP official Ibrahim al-Rubaish claimed in an online video statement that Shehri had been killed in a US drone attack, according to SITE, a US-based website that monitors terrorist threats.
"I present my condolences to all the Mujahideen on the martyrdom of Said al-Shehri who was killed in a US drone attack," Rubaish said.
As with most alleged US drone strikes in Yemen, few details are known. It remains unclear exactly when or where the strike occurred.
http://www.globalpost.com/dispatch/news/regions/middle-east/130717/said-al-shehri-al-qaedas-2-killed-yemen-drone-strike

Weaponry of the future - THE USA DRONE!!