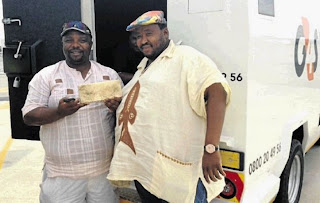 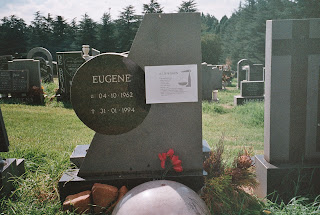 FOOL'S GOLD: Khulubuse Zuma, right, and Sikhumbuzo Shamase even posed for a picture with their fake gold. File photo.


Khulubuse Zuma and his business partner Sikhumbuzo Shamase spent millions of rand on a trip to Conakry, Guinea's capital, to collect R50 million worth of gold bars which turned out to be fake.

According to the Sunday Times Zuma and Shamase landed at Lanseria airport, in Johannesburg, on February 16, on a chartered jet with the cargo, which was moved to OR Tambo International Airport under armed guard for secure storage.
However, when the sealed cargo arrived in Belgium on February 26, it turned out to be copper and zinc bars worth about R7000, according to the newspaper.
Zuma and Shamase reportedly claimed they had been suckered, and said the cargo had passed a laser gun test and had been certified as 99.9 percent pure gold by Guinea's Central Bank
The gold was bought on consignment from a group of 250 villagers in Guinea.
"It's a corrupt system where the military together with traditional leaders who own the land collude," Shamase was quoted as telling the Sunday Times.
He said they did not know what happened because they had done this before and it had always gone well.
Shamase reportedly told the newspaper the matter had not been reported to the authorities because it was "darkest Africa", and they had taken a knock on the chin because it was part of doing business in Africa.
The deal was done under the name of the company Sham-Mok Investments.

Maybe the "real gold" arrives on another flight? EVEN LANDS AT WATERKLOOF?
No Customs no Taxes.
GUESS WHO WILL ULTIMATELY PAY FOR THIS ZUMA "KNOCK?"
SHAM-MOK THRIVES AGAIN!!
SOUNDS LIKE THE "WEST RAND KNOCKERS?"
LOOK HOW LIGHT IS THAT SCAM PARCEL?
MAKES ONE WONDER WHO ARE THE REAL "KNOCKERS?"