NPA out to nail Breytenbach - lawyer 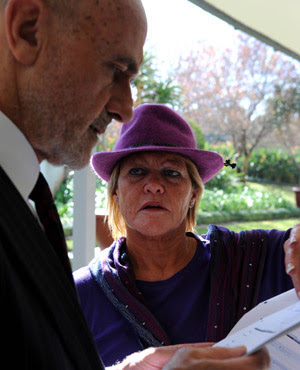 Pretoria - The NPA set out to "nail" its prosecutor Glynnis Breytenbach when it suspended her, her disciplinary hearing in Pretoria heard on Wednesday.

"It's a hatchet job; they were out to nail her," her counsel Wim Trengove said.

He accused the National Prosecuting Authority (NPA) of not affording Breytenbach an opportunity to defend herself before she was suspended on April 30.

He was cross-examining Hercules Wasserman, acting senior manager of the NPA's integrity management unit, at the authority's offices in Silverton.

Wasserman said he told Breytenbach at a meeting on 18 April that she had until 25 April to respond to the accusations against her.

Wasserman's unit was asked to investigate Breytenbach after a complaint by Mendelow Jacobs Attorneys on behalf of Imperial Crown Trading (ICT) in December last year.

This related to a dispute between ICT and Sishen/Kumba Iron Ore over mining rights, which Breytenbach investigated.

Wasserman then filed a report on his findings with acting National Director of Public Prosecutions (NDPP) Nomgcobo Jiba on 20 April, five days before Breytenbach's deadline to submit her side of the story.

"You render a final report on the 20th, and apparently on the strength of it the NDPP decides to suspend advocate Breytenbach without her ever been given the opportunity to put [forward] her side of the case?" Trengove asked.

Wasserman conceded this was what had happened.

Trengove questioned why no other people involved in the complaint against Breytenbach were asked for their version of events.

"You only gathered incriminating evidence. You did nothing whatsoever to get the other side of the story," Trengove said.

Wasserman responded: "It was not my brief."


Breytenbach, who arrived at her hearing wearing a purple hat, jersey and scarf, played on her laptop during testimony, and smiled at times when Trengove made a point.

Trengove questioned the value of Wasserman's evidence that e-mails between Breytenbach and Mike Hellens, senior counsel for Kumba, amounted to unethical conduct.

On Tuesday, Wasserman testified the e-mails indicated Hellens drafted affidavits for Breytenbach, which was particularly concerning as they related to a criminal matter.

But Trengove pointed out that Breytenbach had already testified in an affidavit in February that Hellens had helped her.

"The fact that he played some part in the preparation of that affidavit has always been common cause... Advocate Breytenbach made that clear in early February this year."

The NPA alleges Breytenbach acted impartially in favouring Sishen over ICT in her probe, and that she had an improper relationship with Hellens.

Wasserman admitted he did not interview Hellens or police officer Lieutenant Colonel Sandra van Wyk, who was also involved in drawing up the affidavit.

Trengove then questioned how the NPA could have announced in City Press and on Radio 702 on 2 February that Breytenbach had been suspended, without telling her first.

Wasserman said he was only aware at the time of a letter of intention to suspend.

Trengove questioned whether NPA spokesperson Mthunzi Mhaga was facing disciplinary charges for confirming these untrue statements to the media. Wasserman said he did not know.


Earlier, Trengove accused Wasserman of going beyond his mandate to "rustle up" charges.

"You trawled far and wide through her personal correspondence to rustle up other charges."

Wasserman's unit had accessed Breytenbach's e-mails on the NPA server.

Trengove asked Wasserman if his unit had done anything other than go through Breytenbach's e-mails to investigate ICT's complaint.

Wasserman admitted they had not.

Breytenbach faces charges including gross insubordination and improper conduct for allegedly not handing over her work laptop to the NPA, and for having information on it deleted.

Wasserman told the hearing he had assured Breytenbach her personal information would be treated with sensitivity when she refused to hand over the laptop.

Trengove said instead investigators used personal information to draw up further charges. This included using Breytenbach's application for car finance in 2009, in which she listed under "other income" that she earned R4 000 a month for renting out a flat and stabling a horse.


She was consequently charged with performing work outside the NPA.

Trengove said Wasserman's testimony that evidence was deleted from the laptop was "reckless".

"It's a highly incriminating statement to make... it was reckless and misleading."


Wasserman told the hearing on Tuesday: "A forensic report... found that certain evidence was intentionally destroyed and deleted from the laptop."

Trengove asked on Wednesday how Wasserman could have known that what was deleted was evidence.

Wasserman said 508 files were deleted, but the forensic report indicated these were not retrievable, so it was impossible to know their content.

"You had no basis for your evidence that what was deleted was evidence."

Trengove said Wasserman had omitted to tell the hearing that nothing had been deleted from the laptop before 30 April the day Breytenbach was suspended.

Wasserman said: "It wasn't brought to my attention."

Breytenbach has pleaded not guilty to 16 charges brought against her.

The hearing continues on Thursday at 10:00.