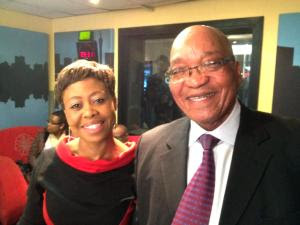 PRESIDENT Jacob Zuma said today that if the ANC told him it no longer wanted him to serve as party leader, he would “walk away”. Zuma claimed he’d never had an “appetite” for being both ANC boss and president of the country, but conceded that he was “not serving reluctantly” because “when the ANC says you serve, you serve”. Zuma’s leadership is under the spotlight as the ANC’s national elective conference in Mangaung in December draws closer.

“If the ANC says ‘don’t serve’ today, I will walk away,” he told Talk Radio 702 show host Redi Tlhabi. In an hour-long interview, Zuma defended Basic Education Minister Angie Motshekga over textbook delivery failures in Limpopo and his executive’s plans to put the judiciary under scrutiny for its role in transformation – a move that has been criticised for potentially eroding the separation of powers.

No arm of government could be left alone, Zuma said. “Whether you talk about the legislature, the executive or the judiciary, these are three very vibrant arms of government. “To say one is going to be left unattended to is incorrect,” he said. Claiming to be an open book, Zuma took questions from the public as the Limpopo textbook debacle dominated most of the interview.
Blaming Motshekga for thousands of Limpopo pupil being unable to study was counterproductive, he said. “We don’t know who is responsible,” said Zuma, conceding that it was Motshekga’s job to find out. He denied one caller’s suggestion that politics had been placed ahead of education by the government, saying that policies had been and would continue to be implemented to correct such mishaps from recurring. When it came to the topic of former ANC Youth League leader Julius Malema, Zuma said he was unwilling to devote much comment to him.

However, he did say he would not retract his comments from 2005 when he declared the firebrand a potential leader and possible future president. He would not comment on Malema’s recent statements that the dropping of corruption charges against the president needed to be re-examined.

Regarding Jackie Selebi’s medical parole announced last week, Zuma denied any preferential treatment of the disgraced former police commissioner. He said stringent institutional bodies had granted Selebi’s medical parole, as had happened with Zuma’s former financial adviser Schabir Shaik, and that there was little need for him to question the decision.

He thanked the public and the media for rooting out local government corruption, and said the government intended curbing wasteful expenditure. Zuma said many who had been found guilty of corruption had paid back their stolen funds. But quizzed further, he couldn’t give a single example of this having happened. Zuma admitted that police corruption was one of the country’s greatest challenges, because of difficulties identifying corrupt officers.

He urged “the real officers” to report their corrupt colleagues. On the ANC leadership succession debate, he denied that any attempts to speak against his own candidacy had been stifled. However, he did say ANC members should not be negative about their leaders, and that there would be chances to nominate potential candidates as possible new heads of the party.

He would not be drawn on recent criticism of his polygamous lifestyle levelled by ANC stalwart Winnie Madikizela-Mandela. Did he think his own personal lifestyle or choices had been an impediment to his presidency? “I don’t think so,” said Zuma, whose presidency was thrown into crisis early on by revelations that he had fathered a child out of wedlock with Sonono Khoza, the daughter of his close friend, soccer boss Irvin Khoza. “I don’t think it is wise to try and discuss personal things unless those things impact on what you do,” Zuma said. Tlhabi argued that as the country’s first citizen, anything he did would be “under scrutiny” – but Zuma said that while “other people could have a view, I don’t think so, because I have done things the way they should be done”.

Where he had made mistakes he had acknowledged this, Zuma said. IOL News Comments by Sonny Pity the transcription is not available....... Zuma now blames H F VERWOERD for the school text book dilemma in Limpopo? Or is he cross with Verwoerd for him (Zuma) not doing his grades? a Sheepish excuse for a State President whose emphasis is on leading the ANC and not SA without bias? 'Pupils suffer while leaders bicker'
Keep for later Cosatu general secretary Zwelinzima Vavi holds a news conference in Johannesburg on Thursday, 31 May 2012 following the union federation's central executive committee meeting.Picture:
SAPA Stephen Grootes & Tara Meaney | 5 days ago PRETORIA – Limpopo school children went without textbooks because the tripartite alliance was too busy squabbling over positions, Congress of South African Trade Unions (Cosatu) General Secretary Zwelinzima Vavi said on Wednesday. He lambasted the alliance, saying too many organisations were simply ignoring the needs of its people.

Vavi said this would not have happened if government officials sent their children to public schools. At the same time, Limpopo officials are painting a worrying picture of corruption, incompetence and greed surrounding the textbook crisis. Schools are still battling to get books into classrooms, despite assurances from the Basic Education Department. Meanwhile, South African Democratic Teachers’ Union (Sadtu) Limpopo secretary Matome Raphasha said some teachers have not been paid since January.

“Problems in Limpopo are beyond the issue of textbooks. There are huge problems.” Democratic Alliance (DA) spokesperson on education Desiree van der Walt said the department is trying to cover up the extent of the scandal. Eyewitness News on Wednesday visited a warehouse in Polokwane and was prevented from taking photos. Many textbooks could be seen stacked on the floor between forklifts. Depsite this, warehouse manager Petros Semenya said deliveries were going well.

There have also been calls for Limpopo Education MEC Dickson Masemola to resign, but the department said he was being used as a scapegoat. (Edited by Clare Matthes) IOL News

Comments by Sonny
IF THE POOR DO NOT HAVE BREAD - THEN FEED THEM CAKE!! IF THE ILLITERATE DO NOT HAVE BOOKS - THEN HAND THEM COMICS AND MATCHES!! IF SOUTH AFRICA DOES NOT HAVE A COMPETENT GOVERNMENT - THEN FIRE THE PRESIDENT!! 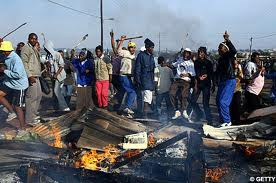 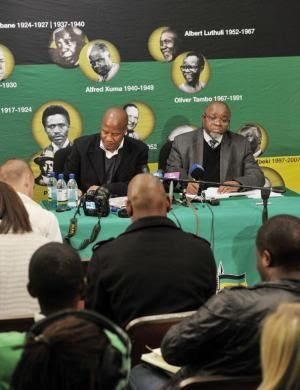 
Johannesburg - Winnie Madikizela-Mandela is not a saint and was wrong to criticise President Jacob Zuma's polygamous lifestyle, said deputy communications minister Stella Ndabeni, according to a report on Monday.

"Life can be interesting. Dali Mpofu represented Julius Malema in the NDC [national disciplinary committee] hearings, Mam' Winnie has always seen a great leader like Madiba in Malema, and now the mother of our nation sees immorality in Zuma... who is a saint between the two of them?" wrote Ndabeni.

Ndabeni's statement came after Madikizela-Mandela in an interview said one could not advise the youth to stick to one partner while the president had multiple wives.

The interview will be aired on September 5.