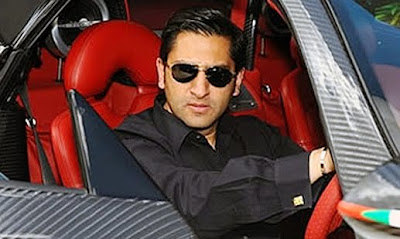 
Zunaid Moti. Picture: carblog.co.za
Alex Eliseev | 22 hours ago
JOHANNESBURG - Eyewitness News on Thursday learnt police raided several properties of controversial Johannesburg businessman Zunaid Moti.
It seems Moti is likely to face arrest on charges which are yet to be revealed.
His lawyers said they have been in touch with the police and are co-operating fully.

In May, Eyewitness News reported the arrests of four men, including two twin brothers, in connection with a suspected robbery and extortion syndicate in the North West province.

It appears the investigation is linked to the raid on several of Moti's properties, which took place on Saturday evening.

The police's Thulani Ngubane said they could not discuss the case at this point.

“We are dealing with a very sensitive investigation. Confirming many of the issues may jeapordise our case.”

Moti's lawyer Ian Small-Smith said, “We are resolving the matter with the authorities in a very responsible way.”

It is understood an arrangement may have been reached for Moti and others to hand themselves over next week.

Moti is the owner of Future Exotics Lifestyle Emporium, a custom built lifestyle venue for exotic vehicles, and aviation.

He also holds the post as chairman of property group, Abalengani.

He was speaking to Moneyweb’s Alec Hogg on SAfm’s Market Update following Moti handing himself over to police at the Hartbeespoort station on Tuesday morning.

Listen to the full podcast or read the transcript here of O’Sullivan’s interview.

Moti, along with another man face charges of armed robbery and conspiracy to commit murder. The 37-year-old businessman is the owner of a luxury vehicle dealership, Future Exotics Lifestyle Emporium and is the chairman of property group Abalengani.

O’Sullivan vehemently denied allegations made by Moti against him during Monday night’s radio programme. This included that O’Sullivan was placing pressure on individuals to obtain incriminating statements against Moti.

Listen to the full podcast or read the transcript here of Moti’s interview.

O’Sullivan said that he had only met Moti once and that the situation was not “O’Sullivan vs Moti” but “The State vs Moti”.

He went on to say that he had evidence of Moti conspiring to murder his client Naeem Cassim. Allegedly, three separate attempts were made on Cassim’s life and O’Sullivan said that Moti’s employees were at two of the scenes.

O’Sullivan added that Moti had been spotted with armed bodyguards who are “thugs” at the Silverstar Casino where one of the alleged attempts against Cassim’s life was made.

He went on to say that Moti and his business partner Rafik Mohamed had tried to pay people off to make the charges go away.

“He doesn’t break knee caps – he has employees that do that. It is typical Mafioso,” O’Sullivan said, adding that he had it on good authority that Moti also wanted to have him killed allegedly.

“What we are dealing with here are a mob.”

On Monday evening, Moti said that he was in London when news of his charges reached him on Saturday. He subsequently returned to South Africa on Monday and agreed to hand himself over. “I didn’t even know what the charges were … and all of a sudden I am ‘on the run.’ It's a lot of nonsense, obviously.”

Moti added that the heart of the matter was not a business-related issue. “This is a personal-related issue with me and my partner Rafik Mohamed,” Moti said.

Mohamed said he and Moti are business partners and have been friends for the last 25 years.

Moti said “Rafik’s family had some difficulties with some people in Brits, which started becoming quite complicated because the client there – I think his name is Naeem Cassim – the complainant in this matter … brought these charges against me.” He said he had never met him or had any business dealings with him.

He added that part of Mohamed’s family had an altercation with Cassim over R30 000, which erupted into a massive argument and Paul O’Sullivan was called in to investigate the matter. “Rafik’s sons were detained for various charges. Eventually he tried to link me to the matter.”

He added that O’Sullivan’s tactic is to put pressure on people to give affidavits and that he had been contacting [people Moti had previous dealings with] to build a case against him. “He’s made a list – if I've had an argument with you and the dog next door and my neighbour, he goes to see them.

“I've got a case against him and a massive investigation into him, so it does affect my business partners, but this is not a business issue. It's a personal issue and Paul’s on a smear campaign.”

He said he didn’t want to give a lot of information away, but that he thought his case was strong.