NPA says no to media at Breytenbach hearing


The National Prosecuting Authority will not allow the media access to senior prosecutor Glynnis Breytenbach's disciplinary hearing, according to a report. (File) 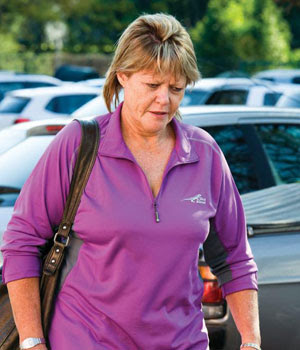 Johannesburg - The National Prosecuting Authority (NPA) will not allow the media access to senior prosecutor Glynnis Breytenbach's disciplinary hearing, according to a report on Wednesday.

The NPA has apparently replaced Advocate Barry Madolo as chair of the hearing, the City Press reported on its website.

The newspaper's lawyers received a letter from state attorney Kenny Phuroe saying that Madolo had "no jurisdiction" to grant the media access to the hearing, which resumes on 23 July.

Phuroe said in the letter that Madolo's ruling was "contradictory, patently wrong, unenforceable and irrational".

As such, the media would not be allowed on the NPA's premises on the day of the hearing.

Last week Breytenbach's lawyer, Gerhard Wagenaar, told Sapa that the matter would be open to the media, but restrictions could arise "if confidential matters arose during proceedings".

NPA head of communications Bulelwa Makeka said the authority would seek legal advice from the State Attorney on whether it could challenge Madolo's ruling.

Media24 brought the application for access as it believed the matter of the hearing was in the public interest.

The group's head of newspapers said on Wednesday that the NPA's decision will be challenged in court.


The disciplinary hearing of senior prosecutor Glynnis Breytenach was in the public interest and the media should be granted access to it, Tim du Plessis said.


"We will approach the High Court to overturn the decision."


Breytenbach was suspended on 30 April for conduct related to cases allocated to her.

She has submitted in papers before the Labour Court that she was suspended as regional head of the specialised commercial crime unit because she insisted on investigating fraud and corruption charges against former police intelligence head, Lieutenant General Richard Mdluli.


The NPA has been warned to treat prosecutor Glynnis Breytenbach's disciplinary hearing with "great circumspection to avoid flouting and frustrating" the investigation into Lieutenant General Richard Mdluli. (File, Beeld)


Cape Town - The National Prosecuting Authority was warned on Wednesday to treat its right to discipline senior prosecutor Glynnis Breytenbach with “great circumspection” to avoid compromising the investigation into Lieutenant General Richard Mdluli, according to a report.

Breytenbach, the senior prosecutor responsible for the case in which Mdluli is accused of allegedly abusing crime intelligence "slush funds", was suspended as regional head of the specialised commercial crime unit on 30 April, allegedly for conduct relating to cases allocated to her.

She had made an urgent application to the Johannesburg Labour Court to have her suspension overturned, arguing that the suspension was an attempt to protect Mdluli.

He found that Breytenbach had not shown any "extraordinary or compelling urgent circumstances to justify a final declaration of the unlawfulness of her suspension".

"From the onset, it needs to be observed that an employer has a general right to discipline its employees," Cele said.

"It will only be in exceptional circumstances that this court will intervene in uncompleted disciplinary matters."

But he also warned the NPA to treat Breytenbach's upcoming disciplinary hearing with "great circumspection to avoid flouting and frustrating" the investigation into Mdluli, City Press reported.

Cele was referring to a recent successful court action by rights group Freedom Under Law, barring Mdluli from returning to work.

The North Gauteng High Court is still to review the NPA’s decisions to drop murder and corruption charges against Mdluli.

Cele said that "there was a real likelihood that by exercising that right (to discipline the NPA) might be found to be flouting and frustrating the aims and objects of the investigations ordered by the court", the report said.

"If she is found guilty and is dismissed, she will be handicapped from utilising the tools of the trade she might need in those investigations.

"The justice sought... in the matter of General Mdluli would have been seriously compromised."

NPA spokesperson Mthunzi Mhaga told reporters after the hearing that Breytenbach was still regarded as an employee.

"We have a disciplinary hearing - which is pending - that will deal with all issues. The hearing might exonerate her, or find her guilty, but we have to allow that process to unfold," he said.

"... for now, she remains an employee of the NPA. I am not aware of any animosity [between Breytenbach and the NPA]."

He could not say whether the hearing would be open to the media, but said there would be more clarity after Media24's application for access was heard by North Gauteng High Court in Pretoria.

Breytenbach's disciplinary hearing was expected to be held on 23 July.

It emerged on 4 July that media would not be allowed on the NPA's premises on the day of the hearing.

The NPA previously said that a ruling by the former chairperson of the hearing, advocate Barry Madolo, to allow the media to attend was "contradictory, patently wrong, unenforceable and irrational".