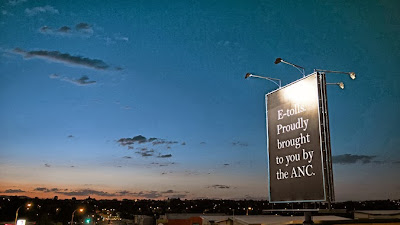 
Though the ruling party is upping its technology game, the marketing behind it remains weak, say experts.
The ANC had little success in turning around critical tweets , sparked by the DA’s billboard campaign. (Delwyn Verasamy, M&G)
It has been a bad week for the ANC as far as social media goes. An initially anonymous campaign by the Democratic ­Alliance produced billboards declaring that e-tolls were "Proudly brought to you by the ANC".

It did not take long for the hashtag #ProudlyBroughtbyANC to trend on Twitter over several days, as frustrated South Africans listed what they perceived to be the ruling party's failures: from President Jacob Zuma's costly Nkandla residence to the arms deal and more.

ANC spokesperson Jackson Mthembu's attempt to turn the tag around by tweeting positive things the ANC had done did little to stem the tide of negativity.

Harper Reed: The techie who got the US to say yes
It is no secret that, historically, the ANC is not social-media savvy.

The party had a gratuitous social media presence in the 2009 elections called "My ANC", with blogs that were rarely updated. In the 2011 municipal elections, it made token nods at social media, but far too late.

President Jacob Zuma launched his official Twitter profile slightly more than a month before the elections. On the same day, at the behest of social media-savvy ANC member Shaka Sisulu, several ANC leaders in Gauteng got together to talk social media.

The DA, in contrast, was an early adopter of social-media strategy. It kicked off in high gear in 2009, inspired in no small part by the viral wave that carried Barack Obama to the presidency in the United States. An official Twitter account was launched, comprehensive Facebook pages devised and, at one stage, its very own social network was created for DA volunteers.

This time, the ANC has done some catching up. It had a crack team of social-media whizz kids at its conference in Mangaung in December 2012, who bolstered the party's social media know-how, some of whom were snapped up from breakaway party Cope's initially impressive social media team before that party's infighting became its undoing.

The playing field between the two biggest parties now appears more level ahead of the 2014 elections.

The ANC's official Twitter account has more than 74000 followers, more than double the DA's, despite the latter's head start and more frequent posts. And although the ANC does not have much of a Facebook presence, spokesperson Keith Khoza said it would improve its My ANC blog this time with more frequent updates.

He was loath to provide any details of the party's social media plans. "But I can tell you that we will use all those platforms."

The DA's campaign has been slow to get off the ground, but reflects larger campaigns such as "Know your DA", which was criticised in its iterations by many on social media and described as largely a failure by marketing analyst Chris Moerdyk.

"It's not all that long till elections, but I'm not seeing the DA coming out with guns firing," Moerdyk told the Mail & Guardian.

And it matters more than ever. While most parties were figuring out social media during the previous election, so were most of their supporters. Today, South Africans are more socially engaged than ever, with 9.4-million active users on Facebook and 5.5-million on Twitter, according to market research by World Wide Worx and Fuseware.

This is a significant number, considering that the ANC won the 2009 national election with just 11.6-million votes.

The DA and the ANC must also compete with the entry of two new parties: Mamphela Ramphele's AgangSA and Julius Malema's Economic Freedom Fighters (EFF).

The EFF in particular, which has little financial resources, sees social media as playing a crucial role in reaching and interacting with its support base.

"It is important, since the Arab Spring," said EFF spokesperson Mbuyiseni Ndlozi. "You are able to get feedback in ways that are not possible with other mediums. So, it is important, not just for elections, but for the social life of any idea."

American tech whizz Harper Reed, the chief technology officer for Obama's social-media re-election campaign, was recently in South Africa and advised political parties to use mobile technology: "You have such a good amount of people on mobile devices here, you can probably do some great things with grassroots mobilisation," he told the M&G.

The ANC and the DA both have presences on MXit, the South African mobile networking success story that has more than six million active monthly users.

In May, the ANC in the Western Cape started early with its plans to wrest control back from the DA and launched an application on mobile platform, called MyANCWC, to "mobilise voters, educate them, and get them to register and vote".

But Moerdyk was dubious about how parties used social media. "I'm not sure they're using it properly," he said. He pointed out that they were inspired by Obama's use of social media, but the US president's initial campaign was aimed at persuading young people to become politically active, not merely to vote for him.

"Marketing is not what I want to say, it's what customers want to hear," he said. "And this is the mistake politicians are making: none of them are embarking on a process to hear what people want to hear."

But, ultimately, social media can do only so much. As Reed put it when giving advice to South Africa parties: "Technology can't actually help you if your candidate sucks."

Verashni Pillay is an associate editor at the Mail & Guardian.
Posted by Tango at 1:21 PM