No Fear No Favour No Framing accused in a Democracy........ 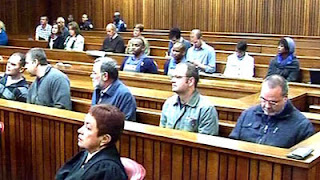 The trial of the 20 Boeremag members took the state more than ten years to conclude. (SABC)

Twenty Boeremag accused convicted of treason and murder, will be sentenced in the High Court in Pretoria on Monday.
The men were arrested in December 2002 in Limpopo after police linked them to a coup plot aimed at assassinating former president, Nelson Mandela.
The state wants Lets Pretorius, Tom Vorster and Dirk Hanekom to spend at least the next 25 years behind bars.
The trial of the 20 Boeremag members took the state more than ten years to conclude and  the evidence suggests that the group had planned a violent takeover, which would have involved annihilating or driving millions of people out of the country.
The accused could be sentenced to a life imprisonment should the high court consider the state request for a harsh sentence.
The high court has heard during the trial that Herman van Rooyen, Rudi Gouws and brothers Johan, Kobus and Wilhelm Pretorius had acted as the bomb squad, blowing up numerous targets and attempting to kill former president Nelson Mandela with a homemade bomb to create chaos in the country.
Evidence brought before the court proved that the group attempted to kill then president Nelson Mandela with a home-made landmine near Bolobedu, in Limpopo, on October 11, 2002.
In one of the attacks, a Soweto woman, Claudia Mokone, was killed by a piece of steel dislodged by a Boeremag bomb.

Let's see if the Judge in this case has come to his senses or not?
The whole trial was a "SAPS Crime Intelligence/NPA FRAME UP AND CONSPIRACY!"

This judgement will confirm police state or Democracy!