Although PAGAD's leadership denied involvement, PAGAD's G-Force, operating in small cells, was believed responsible for killing a large number of gang leaders, and also for a bout of urban terrorism — particularly bombings — in Cape Town. The bombings started in 1998, and included nine bombings in 2000.
In addition to targeting gang leaders, bombing targets included South African authorities, moderate Muslims, synagogues, gay nightclubs, tourist attractions, and Western-associated restaurants[citation needed]. The most prominent attack during this time was the bombing on 25 August 1998 of the Cape Town Planet Hollywood.

In September 2000, magistrate Pieter Theron, who was presiding in a case involving PAGAD members, was murdered in a drive-by shooting.

PAGAD's leaders have become known for making anti-semitic statements. A 1997 incendiary bomb attack on a Jewish bookshop owner was found by police to have been committed with the same material PAGAD has used in other attacks.
In 1998, Ebrahim Moosa, a University of Cape Town academic who had been critical of PAGAD, decided to take a post in the United States after his home was bombed. 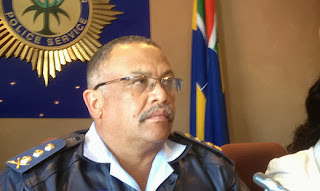 CAPE TOWN - People Against Gangsterism and Drugs (Pagad) has now weighed in on the debacle surrounding Western Cape Police Commissioner Arno Lamoer, questioning the nature of the allegations levelled against him.

Lamoer is being investigated for having a corrupt relationship with a Cape Town businessman and that National Police Chief Riah Phiyega tipped him off about the probe.

Lamoer is also accused of being on the businessman’s payroll.

Pagad says the businessman, whose name is known to Eyewitness News, has funded some SAPS events in the past and didn’t try to hide this.

Pagad's Cassiem Parker says they are surprised the relationship between Lamoer and the businessman has been deemed irregular.

“We aren’t covering up for anybody, but we are saying it might be political manoeuvring where they are saying that money given to the police was actually underhanded.”

Parker says more clarity is needed on the allegations.

It’s been reported the said businessman has been ill and that the recent scandal has taken its toll on his health.

But Pagad says the man has been unwell for some time now.

Lamoer has known about an investigation into his actions since July last year.
He has refused to speak publically about the allegations.

Phiyega is currently facing charges of defeating the ends of justice as a result of the allegations.

Suspended Crime Intelligence boss Chris Ngcobo instructed his officers in Cape Town to open up a case against Phiyega after listening to a phone conversation between her and Lamoer.

Ngcobo was placed on special leave earlier this month for discrepancies relating to his academic qualifications.

Phiyega’s office says she became aware of the inquiry into Lamoer on 29 May after being briefed by the Hawks.

Phiyega has denied any wrongdoing.

She said she was discussing the case with Lamoer only to be able to provide answers to questions in Parliament.

She has labelled the charges against her as a smear campaign.

Added to this, the ANC has challenged those with evidence to come forward.

But opposition parties are calling for Phiyega to be suspended pending the outcome of the investigation.

The Independent Police Investigative Directorate is investigating the charges against Phiyega.
(Edited by Gia Kaplan)

People Against Gangsterism And Drugs (PAGAD)

People Against Gangsterism and Drugs (PAGAD) is a South African terrorist organization that operates in and around Cape Town. The group was formed in late 1995 to serve as a community-based, anti-crime organization. Group members would patrol their neighborhoods to discourage drug dealers from operating in those areas. The drug dealers enjoyed tacit support from corrupt police officers, as well as overt support from criminal gangs. So by forming a community group to reduce the number of drug dealers, the organization was also indirectly taking on powerful criminal organizations. PAGAD's efforts met with some success. PAGAD enjoyed a certain degree of impunity from the South African government, which appreciated the group's fight against crime. Unfortunately, PAGAD was not satisfied with only defensive community protection.


PAGAD soon embarked on an aggressive terrorist campaign, detonating hundreds of bombs throughout Cape Town between 1996 and 2000. In addition to its increased vigilantism, the group also integrated ideological objectives beyond its community-based fight against drug lords. PAGAD's original objective was to help communities to help themselves. The group's efforts were especially successful in many Muslim areas. According to some observers, the Muslim areas possessed a sense of community and united stance against drugs that easily lent itself to PAGAD objectives. PAGAD allied itself with the Islamic group Qibla. PAGAD reportedly set up two front groups to carry out certain operations, Muslims Against Global Oppression (MAGO) and Muslims Against Illegitimate Leaders. By this point, any tacit support of the South African government had long dissipated. PAGAD was clearly no longer a community, anti-crime group. PAGAD had become a substantial terrorist entity that contributed to Cape Town's violent landscape.

PAGAD had adopted a viewpoint far removed form its original philosophy. The group now viewed the South African government as a threat to the values of Muslim communities. PAGAD's violent actions grew to include bombings against "South African authorities, moderate Muslims, synagogues, gay nightclubs, tourist attractions, and Western-associated restaurants" (Patterns of Global Terrorism 2003). PAGAD and its allies adopted an anti-Western philosophy that is reflected in its bombing targets.

Current Goals: Both the South African and United States governments have officially designated PAGAD as a terrorist organization. South African police efforts and court prosecutions severely damaged the group in the early 2000s. Since 2001, PAGAD has demonstrated a significantly weakened operational capability.

Learn more about these U.S. Department of State classifications:

News
White Paper: Perspectives on Terrorism and Responses to It
10/30/2013