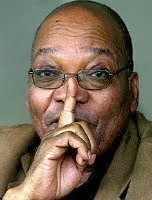 Civil rights group AfriForum, which laid the complaint, said on Friday the two men -- who are both registered medical doctors -- were involved in bomb attacks in 1985.

The attacks took place at supermarkets and shopping centres in the Durban area, CEO Kallie Kriel said in a statement.

"Ramlakan and Dhlomo both admitted before the Truth and Reconciliation Commission (TRC) they had supplied explosive devices during the ANC's 'Operation Butterfly' for a series of attacks on, inter alia, civilian targets."

AfriForum brought the complaints after apartheid-era chemical warfare expert Dr Wouter Basson was found guilty of unprofessional conduct by the HPCSA on December 18.

The six-year-long inquiry related to Basson's involvement in Project Coast, a secret biological and chemical warfare research project which violated international protocols and conventions between the 1980s and early 1990s.

Basson, a cardiologist, was the project officer of Project Coast.

Kriel said if the HPCSA had acted on ethical grounds against Basson, it was only fair to expect it to act against other medical practitioners who were involved in bombings where people were hurt or killed during the same period.

Six other medical practitioners have also submitted independent complaints to the council, he said.

"Ramlakan and Dhlomo were practising as doctors during the attacks and are still registered as medical practitioners."

The council and the KwaZulu-Natal health department were not immediately available for comment.

Kriel said Ramlakan told the TRC of his involvement in the 1985 bombing of politician Amichand Rajbansi's home and the Chatsworth Magistrate's Court.

"He also admitted before the TRC that people were injured in some of the other attacks executed by people under his command," said Kriel.

"Dhlomo also admitted before the TRC that he had supplied explosive devices for various explosions in Durban on September 27, 1985, at the OK Bazaars, Game, Spar and Checkers."

Dhlomo was also involved in explosions in the same year at Grosvenor Girls' High School in Durban and the Executive Hotel in Umlazi.