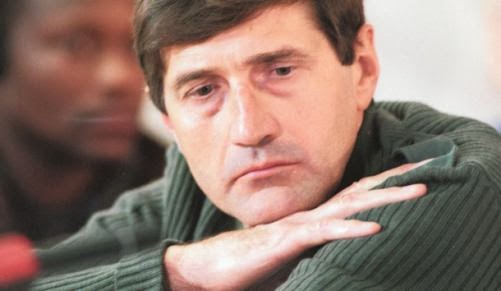 Former Vlakplaas commander is expecting to be freed soon
In a bid to secure his parole, apartheid death squad commander Eugene de Kock is helping the National Prosecuting Authority search for the body of a young man he murdered 29 years ago.
He’s also hoping to get a job at the NPA once he is freed.
It’s been revealed that the parole of the former Vlakplaas commander was recommended by both the Parole Board and the National Advisory Council on Correctional Services.
“Eugene is definitely being released,” said Dr Piet Croucamp, political scientist at the University of Johannesburg who has been working for De Kock’s release over the past five years.
“We don’t have a date yet, but it will be soon,” he said.
But the family of murdered ANC lawyer Bheki Mlangeni were shocked that they had to find out about De Kock’s parole through media reports, saying they were never consulted.
Mlangeni was killed at his home in Soweto in 1991 by a parcel bomb concealed in a Walkman. The package was meant for former Vlakplaas operative turned-ANC-member, Dirk Coetzee.
Mlangeni’s widow, Sepati, said: “I know nothing about this. I’m hearing this for the first time. The least they could have done was contact the family.
“This will also devastate my son, who is out of the country, when he hears this. I am shocked. I don’t know what to say.”
Mlangeni’s mother Catherine, who could not be reached yesterday, spoke strongly last year against any parole for De Kock.
He wrote the family a letter apologising for the murder and asked to meet them.
In the past four years, De Kock has regularly been “booked” out of Pretoria Central’s Medium B prison to help the NPA search for missing children.
Croucamp said De Kock hopes to work for the NPA in some capacity after his release.
In May, it will be 20 years since he was arrested for a series of murders he committed while head of the police hit squad at Vlakplaas.
De Kock was found guilty of six murders and a series of other crimes in October 1996 after a protracted court case. He was sentenced to life plus 212 years in prison.
As part of his parole bid, De Kock launched a search for the body of security guard Japie Maponya, whom he killed with a spade in Swaziland in 1985.
Vlakplaas kidnapped Maponya because they believed he knew where his brother, a suspected Umkhonto weSizwe soldier, was hiding.
Japie was brutally tortured and taken to the South Africa-Swaziland border.
The Maponya family has always been opposed to De Kock’s release, but has now apparently asked to meet him.
De Kock’s previous parole application was denied, partly because some of his victims’ families wanted him to stay in jail.
Croucamp confirmed he was involved in the search for Maponya’s body and went to Swaziland to look for it using maps De Kock drew. He has not yet been successful.
City Press was told that De Kock was taken to the border to help with the search.
After his conviction in October 1996, De Kock met most of his victims’ relatives and asked for forgiveness, which was usually granted.
The only obstacle to De Kock’s freedom could be an evaluation the State Security Agency is now doing regarding possible security risks around his release.
The Parole Board said there was an overall consensus that he should be released.
“According to the social worker’s report, the offender will not commit similar crimes again. According to the psychologist’s report, he understands his crimes,” the board said.
Asked for comment, De Kock said: “Out of respect for the families affected, I do not want to get involved in a discussion about my parole application.” – Additional reporting Xolani Mbanjwa

Former Vlakplaas commander is expecting to be freed soon
In a bid to secure his parole, apartheid death squad commander Eugene de Kock is helping the National Prosecuting Authority search for th

If Eugene De Kock was an ANC MK Cadres he would have been in Parliament a long time ago without serving a prison sentence.

The decision to refuse him parole has always been political and not on conduct.

IF THIS IS RECONCILIATION, THEN, DEAL US OUT!!

JACQUES PAUW LABELLED EUGENE DE KOCK "PRIME EVIL"  IT IS HIS DUTY TO NOW LABEL HIM "THE PATRIOT!"
Posted by Sonny Cox at 6:48 AM