'Elections need to be monitored' 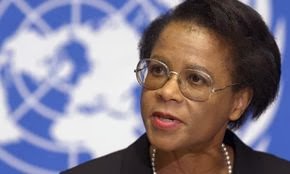 "If these allegations are true then South African citizens face the prospect of African National Congress-aligned thugs threatening our hard-won right to free and fair elections," party leader Mamphela Ramphele said in a statement.

There is an urgent need for independent monitors during the elections after claims that some voters in the Tlokwe by-elections in the North West were not legitimate, Agang SA said on Monday.
"If these allegations are true then South African citizens face the prospect of African National Congress-aligned thugs threatening our hard-won right to free and fair elections," party leader Mamphela Ramphele said in a statement.
"The fact is, this type of behaviour is typical of individuals who realise that their hold on political power is weakening."
She claimed that Tlokwe was another demonstration of rampant corruption and self-interest displayed by some members of the ANC.
According to City Press on Sunday, eight independent candidates at the Tlokwe municipality had alleged in court papers that hundreds, if not thousands, of voters in the area were not legitimate.
The electoral court in Bloemfontein next month will hear a court application by the independent candidates to have the election result set aside and an independent investigation to be conducted.
The newspaper reported that court papers submitted by the independent candidates alleged that at least 500 voters were registered at addresses outside the ward areas, and at least 600 had provided false or incomplete addresses on voter registration forms.
Other allegations included that 31 people from other areas were re-registered in the contested wards and transported to the Tlokwe area to vote in the elections.
In responding papers, the Independent Electoral Commission's chief electoral officer Mosoto Moepya said: "No evidential material has been brought before the court in support of the allegations".
The ANC retained six wards in by-elections which took place in the highly contested region in December last year.
Ramphele said it was evident that non-performance and empty promises were taking their toll and voters were beginning to vote against the ruling party.
"If Tlokwe is a symptom of the panic within the ANC then we need to be on our guard against more widespread electoral fraud in the general elections this year," she said.


Was the Independent Electoral Commission's chief electoral officer SA ever INDEPENDENT, free and fair since 1994?

EVEN THE APARTHEID TRAITOR F W DE KLERK ADMITTED THAT "THEY" LOADED BALLOT BOXES WITH AT LEAST 1,000,000 FALSE ANC VOTES IN FAVOUR OF NELSON MANDELA!

THE RUSSIANS TAUGHT THEIR COMRADES HOW TO RIG POLLS A LONG TIME AGO.
Posted by Sonny Cox at 10:40 AM