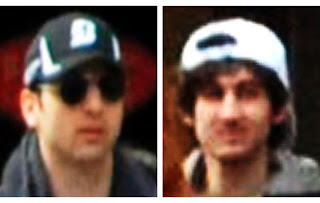 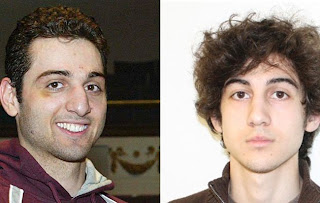 Tamerlan Tsarnaev (L), 26, is pictured in 2010 in Lowell, Massachusetts, and his brother Dzhokhar Tsarnaev, 19, is pictured in an undated FBI handout photo in this combination photo. The two are suspects in the April 15, 2013 bombing at the Boston Marathon. Image by: HANDOUT / REUTERS
Once you smell a "Terrorist or Traitor' hunt him down and squash him flat!

The FBI interviewed suspected Boston Marathon bomber Tamerlan Tsarnaev in early 2011, it said in a statement late Friday, following a tip from a foreign government that he was “a follower of radical Islam” and was preparing to leave the United States to join underground organizations.

The FBI said its interview two years ago of Tsarnaev and his family, along with checks of travel records, Internet activity and personal associations, “did not find any terrorism activity” at the time.
But the revelation is the first evidence that the Tsarnaev family came to US security officials’ attention after they emigrated to the United States about a decade ago, and it could raise questions about whether the government missed potential warning signs about the behavior of two brothers.
Tamerlan Tsarnaev, 26, died overnight in Boston in a shootout with police. His younger brother, Dzhokhar, 19, was taken into custody on Friday evening in the Boston suburb of Watertown after a dramatic, day-long manhunt, Boston police said.
The FBI statement did not disclose which foreign government asked it for information about the brothers and their family.
But Tamerlan was widely reported to have made a trip to Russia last year.
The brothers and their family were ethnic Chechens, whose small republic’s attempts at independence following the collapse of the Soviet Union were brutally crushed by Moscow. Both brothers, however, were born in the Central Asian state of Kyrgyzstan, the FBI statement said, and Dzhokhar was a naturalized US citizen.
The revelation that the elder Tsarnaev was on US law enforcement authorities’ radar screens seemed likely to raise uncomfortable questions for the Obama administration about whether it could have done anything to detect and stop the plot.
“It’s new information to me and it’s very disturbing that he’s on the FBI radar screen,” Rep. Michael McCaul, Texas Republican and chairman of the House Homeland Security Committee, said on CNN late Friday.
It is not known when the Boston Marathon bombings were planned, or whether there were clues that could have allowed authorities to pre-empt it.
National security and law enforcement authorities said on earlier Friday that they had not turned up any evidence that the Tsarnaevs had contacts with al Qaeda or other militants overseas.
Rep. Peter King, New York Republican and member of the House intelligence committee, said in a statement that there “was no federal intelligence or chatter prior to the marathon bombings,” a reference to militant communications often picked up in advance of an impending attack.
The US officials said they were leaning toward the theory that the bombings were motivated by Islamic extremism, although that remained unproven.
Were the Tsarnaevs working with others?
Violent plots involving a single individual or small groups who self-radicalize and have minimal dealings with other militants can be extremely difficult to detect in advance, according to US counterterrorism officials and private experts.
The revelation about the FBI contacts with the elder Tsarnaev came as US officials told Reuters that investigators are scouring government data banks to determine if spy and police agencies missed potential clues that might have alerted them to the two brothers.
Another top priority for investigators is to determine whether the brothers had any confederates either inside the United States or overseas, one US official said. This official and others spoke on condition of anonymity to discuss an ongoing investigation.
Three people were taken into custody for questioning in New Bedford, Massachusetts, police said on Friday. Two men and a woman are being questioned by the FBI “on the assumption there is an affiliation with” Dzhokhar Tsarnaev, Lieutenant Robert Richard of the New Bedford Police said.
One official said the possibility that the US government had information that should have raised questions about the Tsarnaev brothers before the attack could not be ruled out.
Other officials said they were unaware that such material had turned up.
In several recent cases, US intelligence and law enforcement agencies failed to put together clues that, in hindsight, might have led them to pre-empt a plot.
In 2009, US Army Maj. Nidal Hassan killed 13 people and wounded another 32 at Fort Hood, Texas. Prior to the shooting spree, Hassan had email contacts with Anwar al-Awlaki, the US-born cleric and leader of al Qaida’s affiliate in Yemen who was later killed in a US drone strike.
US authorities had investigated Hassan’s emails, but concluded they posed no threat of violence.
The father of Umar Farouk Abdulmutallab, the so-called “underwear bomber” who tried to bring down a US jetliner over Detroit on Christmas Day 2009, reported suspicions about his son’s activities to the US Embassy in Nigeria. But Abdulmutallab’s US visa was never revoked.
A report by the Senate intelligence committee heavily criticized US intelligence agencies for failing to act on available information in that case.
But Brian Jenkins, a respected terrorism expert at the RAND Corp., dismissed the idea that the Boston bombings represented an intelligence failure.
People will inevitably ask, “did we miss something in intelligence?” said Jenkins, speaking before the news of the 2011 FBI interview with Tamerlan Tsarnaev become public.
“Some people will label it an ‘intelligence failure.’ But that’s because people have come to expect 100% security,” he said.

So, if the CIA and FBI had done their work correctly, then this massacre would not have taken place?
Once you smell a "Terrorist or Traitor' hunt him down and squash him flat!
These agencies seem to be behind with their homework?
Perfection has is price and casualties...........
Another American 'Conspiracy Saga' unfolds.