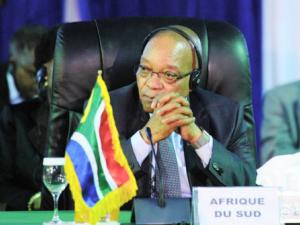 Johannesburg - Is President Jacob Zuma Big Brother, flexing South Africa’s muscles in Africa as his predecessors dared not? Or is he David, slinging stones at the might of the West? Or both?
If you look at two major themes now topping South Africa’s foreign policy agenda – Brics and pacifying Africa – the West figures as the antagonist in both.
South Africa joined the Brics bloc (Brazil Russia, India and China) in part to counteract the dominance of Western countries in the world.
And Zuma’s new assertiveness in Africa is also driven in part by his need to thwart what he sees as Western – mainly French – ambitions on the continent.
It is for that reason that he has shrugged off the qualms about South Africa being labelled the Big Brother of Africa, which checked his predecessors.
The first clear sign of his greater assertiveness in Africa was South Africa’s robust campaign to get Nkosazana Dlamini Zuma elected as chairwoman of the AU Commission last year.
That was an enterprise fraught with the risk of branding South Africa a Big Brother since the ANC ditched the unspoken rule that none of Africa’s big powers should occupy that seat.
Yet Zuma justified that ultimately successful initiative to any doubters by saying it was necessary to put a strong former liberation struggler at the helm of African affairs to replace someone who Pretoria believed was essentially just a puppet of France.
The next important sign of Zuma’s greater assertiveness in Africa has been his readiness to use South Africa’s military on the continent in a more robust way.
This is a still-unfolding chapter of what one might call the Zuma doctrine.
The lethal firefight that our parabats had with Seleka rebels in the Central African Republic (CAR) last month seemed to exemplify the new approach.
And certainly International Relations and Co-operation Minister Maite Nkoana-Mashabane seems to want it to be understood as such, at least implicitly presenting it as an expression of Zuma’s strong conviction that it is time to put a stop to the epidemic of mutinies and coups that have so bedevilled Africa’s development.
Zuma himself, though, appears to be sticking to a far narrower explanation, that our parabats were, after all, just there to protect our military trainers, and accidentally got caught up in a coup.
But that may just be because that is how he originally justified the mission to Parliament. Or maybe he does not want to contaminate the wider doctrine by association with a mission that failed.
And our troops might yet return to the CAR more explicitly in a wider role, as part of a regional military peacekeeping force tasked to ensure that the Seleka rebels, now in government, keep their promise to restore democratic civilian government soon.
CAR Prime Minister Nicolas Tiangaye, formerly a member of the civilian political opposition to deposed president Francois Bozize and not a member of Seleka, is due in South Africa soon to discuss this and other proposals.
Zuma’s decision to contribute a battalion of troops to the Southern African Development Community force that is about to be deployed to try to purge the eastern Democratic Republic of Congo (DRC) of rebel groups like M23 is much more clearly part of “the Zuma doctrine”.
Interwoven through all of these manoeuvres is also Zuma’s sense that he is countering French and possibly wider Western designs in central Africa, though what exactly they are is not spelt out.
The Zuma doctrine is, rather oddly, both a drama of Big Brother awakening and, conversely, also of David and Goliath.
In the first sense, Africa’s biggest power might be said to be assuming at last its manifest destiny, to save the continent from itself.
But in the second sense, is the ANC also attempting the vastly more ambitious mission of trying to turn the tide of the history of the world over the past two decades – which have essentially been 22 years of unchallenged Western pre-eminence since the collapse of the Soviet Union?
The Star

Illusions of Grandeur......
This player has become an instant dictator - void of any truth.
GOLIATH THOUGHT HE WAS THE GREATEST - UNTIL A SMALL BOY TOOK HIM DOWN~!
The ANC government under Zuma cannot control corruption nor crime in South Africa.
Now he wants to dictate to Africa and the Rest of the World?
Is this how to acquire a permanent seat on the UN?
OR IS THIS A WAY TO TAKE THE PEOPLE OF SOUTH AFRICA DEEPER INTO THE BOWEL OF
HELL, FURTHER THAN APARTHEID EVER COULD DO?