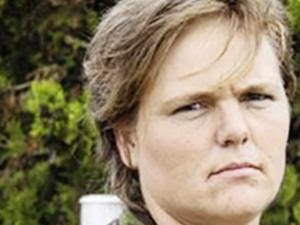 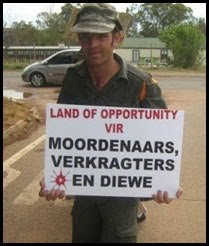 October 31 2013 at 01:17pm
By Sapa
Copy of Copy of DF cornelia 3010 a
SUPPLIED
Cornelia de Wet, a member of the AWB, has claimed that she played a role in the murder of three members of the Steenkamp family in the Northern Cape last year.
Related Stories
Cop ‘in agony’ over Griquatown teen
Murdered couple’s son inherits R23m
Griquatown accused gets money for trial
We killed Griquatown family - AWB member
Bloemfontein - The trial of a minor accused of murdering Griquatown farmer Deon Steenkamp and his family will continue next week despite another person confessing to the killings, the NPA said on Thursday.

The boy faces three murder charges, one of rape, and one of defeating the ends of justice for the murder of Steenkamp, 44, his wife Christelle, 43, and their daughter, Marthella, 14, at their farm Naauwhoek on April 6, 2012. Marthella was also raped.

In an exclusive interview with Diamond Fields Advertiser De Wet, a member of the Afrikaner Weerstandsbeweging, confessed to her alleged role in the murders of the Steenkamps.

The report said the 37-year-old De Wet, in custody for possession of explosives and ammunition, alleged the Steenkamp murders were part of a plan to attack white farmers in an attempt to instil fear and incite racial hatred.

The report, carried on IOL earlier on Thursday, said the boy's lawyer and his guardian met De Wet at the Kimberley prison this week.

Malabi said the prosecuting team would nevertheless proceed with the case next week.

The trial was expected to continue throughout November, with additional dates in December if required. The boy was out on bail and in the care of a guardian.

Meanwhile, people on Twitter expressed shock and scepticism at De Wet’s claims. @MissVASmith asked ”Can a person be SO racist that they arrange the murder, rape & torture of their OWN race solely to promote racism? #AWB “

@DabigB tweeted: So these #awb people are killing other whites to instill fear and racial hate, #stevehofmeyer must be pissed #redOctober

He was not the only one asking Steve Hofmeyr to comment on the article. Hofmeyr eventually tweeted “...Toemaar. Klink my soos 'n Eugene Terre'blanche-se-seks-met-sy-minderjarige-moordenaars tipe stront storie.”

On IOL’s Facebook page, one person wrote: “This is an obvious attempt at disinformation and psychological warfare by NI (and a very feeble one at that), following the success of #RedOctober at highlighting the scourge of farm murders and the sadistic and brutal nature of those attacks. Anyone remotely familiar with the Steenkamp case and the evidence presented so far, will see right through this. The woman has been arrested for possession of explosives etc and will say anything in mitigation. Surely the timing following right after the Boeremag conviction is grounds for suspicion alone? Unless of course, you can't or prefer not to...” - Sapa, IOL

In a shocking development, a well-known right-wing female farmer, who is currently in custody, has claimed that she was part of a “hit squad” responsible for the murders of three members of the Steenkamp family in Griquatown.

In an exclusive interview with the DFA, Cornelia de Wet, a member of the Afrikaner Weerstandsbeweging (AWB), on Wednesday confessed her alleged role in the murders of three members of the Steenkamp family, who were gunned down on their farm Naauwhoek outside Griquatown, in April last year.

From inside a Kimberley prison, the 37-year-old De Wet on Wednesday spoke openly about what, according to her, transpired on the morning before Deon Steenkamp, 44, his wife Christelle, 43, and their daughter, Marthella, 14, was found dead, saying she was present during the murders and even remembered Deon’s last words.

She also explained her role in the execution of the attack, saying an amount of R100 000 was paid “for the hit”.

The names of the three men, who she claimed were involved in the killing, are known to the DFA.

Copy of Copy of DF cornelia 3010 a
Cornelia de Wet, a member of the AWB, has claimed that she played a role in the murder of three members of the Steenkamp family in the Northern Cape last year.
SUPPLIED
She also implicated the owner of a security company as being the mastermind behind the attack, and claimed that he had initiated numerous attacks on white farmers in an attempt to “instill a sense of fear and force farmers to make use of their security services . . . it (the attack) was also aimed at inciting racial hatred”.

De Wet further admitted that she also worked as an officer in the Leeuwag and the Boere-beskermingsforum (BBF), both militant right-wing movements in which the alleged mastermind had been a “general”, adding that his company “was nothing but a front to train right-wingers for war and terror”.

De Wet on Wednesday met with the defence team representing the teenager, who is currently facing charges of murdering the Steenkamp family. The legal delegation, who were seen leaving the Kimberley Prison, included Stoffel de Jager and Advocates Willem Coetzee and Sharon Erasmus, as well as the guardian of the 17-year-old accused.

She provided them with a statement that, according to her, will be used in the defence’s case.

She said she also gave an affidavit to the police in Middleburg, where she is currently incarcerated while awaiting trial for possession of explosives and ammunition. She will appear in the Carolina Magistrate’s Court on November 28 on these charges.

She said she was transferred to Kimberley so that she could meet the accused’s defence team.

She also claimed that “this was not the first farm attack that we were involved in”. Pressed for time in the interview, she did not give details of the other attacks, but provided a detailed account of what allegedly happened on the Naauwhoek farm when the Steenkamps were murdered.

“We were sitting in the car in the veld, watching the house for about half an hour to an hour.

“We saw Don (Steenkamp) come out of the house and walk into the veld. We waited for a little while and then we stormed into the house. We instructed Deon to go into his room and open the safe. We took two weapons, a .357 revolver and a .32 rifle, out of the safe.

“Deon and Christelle were then shot.

De Wet did not say who shot them, but claimed that she was “only a spectator”, while two men were “responsible for all the shooting”.

“I then watched as (one of the attackers) grabbed Marthella and raped her. After this I went outside and heard two shots. I knew they had shot her.

“I went back into the house and saw Marthella lying next to her mother. We took the weapons, and returned to the car where (one of the three men) was waiting for us and drove off.”

“We threw the weapons out of the car at the gate of the farm.”

She added that they deliberately did not shoot Don, the only surviving member of the family.

De Wet recalled that the family was extremely petrified during the ordeal. “I could see the shock on their faces when they realised that they were being killed by white people.”

Responding to a question why there were no fingerprints found at the scene, she said “we were wearing gloves”.

“After this I had no further contact with any of the three men involved.”

She said she decided to come out with the real story because “the truth was haunting me and I know that (the accused) was never guilty of the murders”.

De Wet said that from the age of 15, she had been involved with the AWB and received training from the organisation.

“On April 27 last year (shortly after the Steenkamp farm attack), I myself was the victim of a farm attack in which I was almost killed. I still believe that this was an attempt on my life because they (the men she named as the murderers of the Steenkamp family) wanted to keep me quiet.”

She said she was arrested on May 29 2012 on 40 charges, including high treason, terrorism and possession of ammunition and explosives.

“All these charges have been dropped with the exception of the possession of ammunition and explosives, which belonged to (one of the men allegedly involved in the Steenkamp attack).”

Stoffel de Jager, lawyer for the defence in the Steenkamp murder trial, on Wednesday confirmed that he, together with Erasmus and Coetzee, as well as the accused’s guardian had met and “consulted with a witness” at the Kimberley Correctional Services. He declined to give any further comment.

Diamond Fields Advertiser
IOL News
Posted by Tango at 4:26 AM