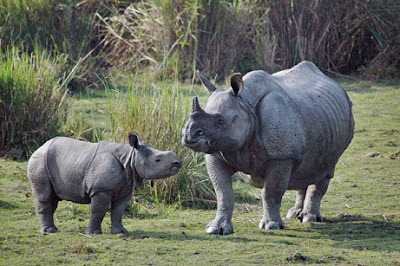 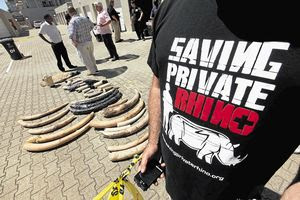 Searle Derman of Saving Private Rhino with a stash of tusks and horns found in a raid on a home in Table View, Cape Town, yesterday. Police arrested two men Picture: ESA ALEXANDER
Related News
Two arrested for Ivory in Cape Town
Rhino poaching on the rise
23 rhinos killed in Zim A businessman ditched the boardroom yesterday to bust what appears to be an ivory and shark fin syndicate operating from an upmarket block of flats in Cape Town.
Searle Derman, owner of the luxury Aquila Private Game Reserve, called police to raid the apartment complex in Table View.

Shortly after about 9am, Melody de Andrade called Derman to tell him about a peculiar smell coming from a neighbouring garage.

De Andrade, who follows Derman's Saving Private Rhino initiative on Facebook, said: "I was called downstairs by my domestic worker because she smelled something burning and said there was a fire in the garage opposite us.

"Then I realised there was someone in the garage, but he kept shouting at us to go away. I thought something suspicious was going on so I called Searle." She told him the fumes smelled like burning hair.

Derman - who began the anti-rhino poaching initiative after two rhinos on his reserve were killed by poachers in August - said that when De Andrade phoned him he "flew out" of his Sea Point office and contacted the police.

Police spokesman Captain FC van Wyk said they found a "large quantity" of ivory ornaments and jewellery and "portions of ivory tusks" in an 11th-floor apartment at De Andrade's building.

Derman said they also found a white powdery substance that smelled like the burnt hair De Andrade had complained about.

In fact, Derman said, the whole building smelled so bad that residents had fled their homes.

"It seems as if the guys were grinding and carving pieces of ivory in the garage. They would then carry it to the apartment where they were also working."

De Andrade said at one stage she had managed to get inside the apartment the police were raiding.

"The [Chinese nationals] kept saying to me [the horns] are for their teeth and I said: 'Yeah right' and then later they said it is for their hair and I said: 'Make up your mind.'"

By late yesterday afternoon police and other government agencies, including the SA Revenue Service, were still on the scene.

"It is terrible to look at the tusks. There is so much pain and suffering behind it all," said Derman. "A lot of the time these animals are still alive when their tusks are removed."
Posted by Tango at 9:46 PM