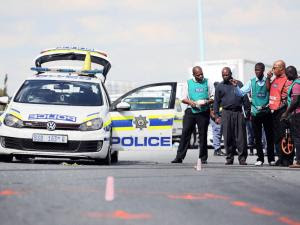 
THE STAR
The officers vehicle after the shooting. They are both in a critical condition. Picture: Itumeleng English
Johannesburg - Two police constables were shot and injured on the M2 East highway on Tuesday, resulting in traffic slowing down to a crawl and to back up for kilometres.

And, as police were combing the scene for clues, a helicopter took one of the injured men to hospital.

The Gauteng Flying Squad officers were shot and wounded by four occupants of a silver Mercedes-Benz they had flagged down.

“When they tried to pull it off the road, the occupants started firing shots at them with assault rifles (possibly R5s),” said Gauteng police spokesman Lungelo Dlamini, adding that the shootout had taken place soon after 1pm.

The policemen were still in hospital on Wednesday morning, Gauteng police said.


A police chopper takes off near the scene where two officers were shot and wounded on Tuesday by four gunmen near the Joe Slovo off-ramp on the M2 highway in Joburg. Picture: Itumeleng English
THE STAR
Constables Anthony Magalebata, 37, and Lufhuno Maremba, 30, were both hit in the upper body.

“Constable Maremba is still in a critical condition and the other member is stable,” spokesman Lt-Col Lungelo Dlamini said.

No arrests had been made and police were looking for thegunmen.

An eyewitness, who declined to be identified, told The Star that he was driving from the Joburg CBD when he saw a Flying Squad car driving at high speed.

“They were armed, as if they were looking for something. It was only when we got to the highway that we became aware of the situation. Traffic was hectic, as the highway was closed off.

“I decided to stop the car and walk on foot nearer to the scene. Police were everywhere, with a chopper hovering over the place.

“I saw the one officer being airlifted into the helicopter, while the other one was being assisted by paramedics on site,” said the man.

He added that the helicopter had returned later to fetch the second officer.

The man said traffic on the highway was at a standstill by then as motorists began turning around.

The Joe Slovo off-ramp east of the CBD was cordoned off as police swept the area for clues.

A man who has lived under the Joe Slovo off-ramp bridge for the past two years, making a living collecting and selling scrap, said this was the first crime incident he had witnessed.

The man, who asked not to be named for safety reasons, said he had heard gunshots while returning back to his shelter.

“I didn’t see what happened. I saw many police cars parked next to the bridge when I arrived back from the scrapyard. I then remembered that this might have been the gunshots I heard earlier,” he said.

The man began walking up the steep hill to view what he described as a “Hollywood crime action movie” shortly after the interview.

A motorist who had been stuck in traffic for almost two hours joined onlookers because he thought “we should also park our cars and see what happened”, the man said.

“Traffic stayed at a standstill until police conducted their on-scene investigations. Both the afternoon and peak-hour traffic were affected,” she said.