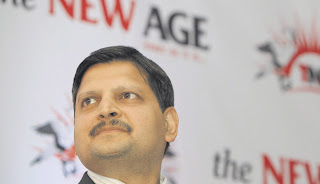 
The ANC has allegedly not paid rent since taking occupation of offices in 2008 in a Cape Town building the family owns on the foreshore.

"Show us a single invoice for our rent at Sahara House," said an ANC official familiar with the circumstances. "You won't find one because we were not asked or expected to pay rent."
Another tenant who occupies a smaller office in the building told the Mail & Guardian they were paying about R13 000 a month, which included electricity. But nobody is keeping tally in the ANC, because the seventh floor offices are considered a "party donation" by the Guptas, the M&G was informed by past insiders who did not want to be identified.
But the arrangement came to a head shortly before the ANC's elective conference in Mangaung in December, when it was widely reported that the ANC was facing eviction from Sahara House because the Guptas were demanding "outstanding" rent.
Some ANC officials questioned the timing of the threatened eviction and said it was related to the fact that several ANC members of the provincial executive committee had notsupported President Jacob Zuma for a second term.
The Guptas are regarded as having close ties with Zuma.
The ANC's provincial secretary, Songezo Mjongile, told the M&G in an interview in Sahara
House this week that the ANC's provincial executive committee had been "interacting" with the Gupta-owned Sahara Group over the rent issue.
Outstanding accounts
"The matter of the lease of the offices of the ANC has been amicably resolved with the Sahara Group," said Mjongile. "The ANC will continue to occupy the building but we will settle whatever outstanding accounts [there are]. But that is between us and the Guptas and Sahara."
"We confirm that this matter is currently being dealt with by our attorneys who have been tasked to resolve the matter," said the Gupta family spokesperson, Gary Naidoo, in response to questions from the M&G.
Mjongile said the issue of the provincial ANC's inherited debt and financial woes would be ironed out this year.
The M&G last year reported that the ANC had had its office furniture attached by the sheriff of the court. "We are very optimistic that we will be able to resolve the funding problems," Mjongile said. "The ANC relies on donations, like all other political parties."
Mjongile said Democratic Alliance leader Helen Zille had now been "forced to confess" she took donations from the Guptas, which she had not wanted to confirm earlier. The law does not currently force a political party to declare the source of its funding.
A row broke out between Zille and New Age newspaper executives after she refused to speak at one of their business breakfasts because it was being funded by public money.
Zille this week said she had written to Zuma to ask for the appointment of an inquiry to investigate the legality of "public money" used to fund the newspaper.
Cutting ties with the Guptas
At a press conference on January 30, Zille confirmed she had asked Sahara Computers for funding before the 2009 general elections. The DA received two donations from the company's chief executive, Stefan Nel, who she claimed donated them in his personal capacity.
However, in 2010, when news­papers started reporting about the Guptas' relationship with Zuma, she said she had instructed the fundraising department to cut ties with the Guptas and all their companies.
Zille compared the New Age's funding saga to the apartheid-era Infogate scandal of the late 1970s, when a commission of inquiry found that then prime minister John Vorster and politician Connie Mulder were aware that public funding was used to finance the "government friendly" Citizen newspaper.
"All the evidence points to the same thing: the ANC is using public money, both overtly and covertly, to fund a newspaper which is openly favourable to their government," said Zille.
But Mjongile said this whole episode had shown up Zille's "deceitful politics", and she should now reveal who recently donated R4-million toward renovating the DA's provincial offices in Cape Town.
Different views
Mjongile said the ANC was working together to take the province back from the DA.
"We are fully supportive of the decisions taken in Mangaung, and we are now ensuring that we unite the ANC in action to meet the challenges," he said.
Asked whether he did not feel there might be purging in the Western Cape of those in the ANC, like himself, who supported Deputy President Kgalema Motlanthe for party president, Mjongile said he did not believe it would happen. The ANC in the province had reflected on Mangaung, he said, and accepted the different views at the time.
"We are all now of the same view we need to take the Western Cape back from the DA. The DA is not doing a lot to improve the conditions of our people and that is what unites us as a province," said Mjongile.
"We have said we want to spend more time working on the project of 2014 [the general election] and leave behind the side-shows, 'skinnering', bickering and all those other things that are not critical to ensure the success of the ANC in 2014."

"Rent" is filed under the State Secrets Bill, therefore the public don't have access to any information!

POLITICAL FUNDING IS 'SECRET' THEREFORE THE GUPTA'S DON'T HAVE TO EXPLAIN, EVEN TO SARS!

If only Malema was funded by the Gupta's.

If the  GUPTA'S sponsor the SA Proteas, would there also be a conflict of interests?
Posted by Sonny Cox at 12:57 AM