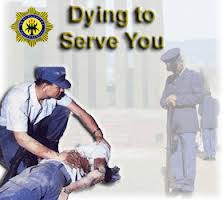 Five people, including a police officer, have been arrested in Kroonstad for killing a policeman and bombing two ATMs, Free State police said on Thursday.
07 February 2013 | Sapa

Colonel Thandi Mbambo said two men were arrested on Tuesday and appeared in the Bloemfontein Magistrate's Court on Wednesday. They were in custody.Another three men, including a North West policeman, were arrested in Kroonstad on Wednesday.Warrant Officer Thabiso Maliela, 52, was killed when he drove past the Kagisanong shopping complex, near Mangaung, while robbers were trying to break open two ATMs there on Sunday. A second policeman, who was with him, was wounded.The men arrested on Wednesday would appear in court on Friday, said Mbambo on charges of murder, attempted murder and armed robbery.She said a vehicle linked to the ATM bombings had been confiscatedThe investigation was continuing to determine whether the group could be linked to other ATM bombings in the area.Maliela would receive an official police funeral in Bloemfontein on Saturday.

Only in South Africa where "IT TAKES A COP TO KILL A POLICEMAN!"
How many of them get identified or convicted?
Where are the statistics Mr Minister or Mr President?