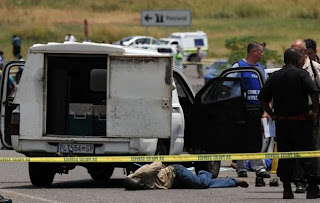 A suspect, under heavy police guard, lies on the road after a foiled cash-in-transit heistImage by: SUPPLIED


A policeman being investigated for several deadly cash-in-transit robberies involving more than R30-million is responsible for gathering crime intelligence on threats against President Jacob Zuma and the top echelons of government.

The Times can today reveal that Captain Morris "KGB" Tshabalala, - who yesterday appeared in the Sasolburg Magistrate's Court in connection with the February 16 attack on a Protea Coin cash-in-transit van - is part of an elite team that is partly responsible for protecting the country's leaders.
Tshabalala, 39, and his colleague, Sergeant Willby Molefe, 41, who appeared alongside four other accused, are stationed within the covert section of police crime intelligence.
Three guards were injured in the Sasolburg, Free State, attack and an estimated R3-million was stolen.
A seasoned police officer, Tshabalala has top security clearance that allows him access to some of the state's most classified information - which investigators believe he might have used to help plan at least seven cash-in-transit robberies.
Tshabalala has been involved in numerous high-level intelligence operations, including helping to foil the planned right-wing terror attack on the ANC's 2012 elective conference in Mangaung.
He was also, according to police sources, instrumental in the criminal investigation of former crime intelligence boss Lieutenant-General Richard Mdluli (who is the subject of an internal disciplinary hearing).
Tshabalala was, according to sources, instrumental in solving the complex case against cash-in-transit heist mastermind Collins Chauke a few years ago.
Police arrested Tshabalala hours before he could compete in the Comrades Marathon on Sunday. He appeared, in leg irons, in court yesterday on three counts of attempted murder, armed robbery and possession of unlicensed firearms and ammunition.
The Sasolburg court room was heavily guarded and packed to capacity with crime intelligence officers in support of the policemen.
Tshabalala, still wearing a grey Comrades Marathon jacket; Molefe and their co-accused, Sipho Nkosi, Mapotswe Moloi, Lehlogonolo Tlekelele and Sipho Motsamayi, were remanded until Thursday for a formal bail application.
Information obtained by The Times from independent sources reveals that the Asset Forfeiture Unit has joined a specialised team from the Hawks investigating Tshabalala and his co-accused.
The team was formed after a high-level meeting between national police commissioner General Riah Phiyega and senior staff of several cash-management companies this week.
According to cash-management industry insiders, Tshabalala is suspected of having used his position to plan and carry out heists.
The Asset Forfeiture Unit will investigate what happened to the more than R30-million that the six are suspected of stealing in heists in Gauteng, Eastern Cape and the Free State.
In one of the Gauteng heists carried out in 2010, a member of the Johannesburg dog unit was killed.
Detectives close to the investigation described Tshabalala and his colleagues as a law unto themselves.
"They are like God who has become the devil. They operate on their own terms and account to no one. They are untouchable," said a detective.
"Our fear is that, like so many other similar cases against so many other crime intelligence officers, this investigation will go nowhere," he said.
Another detective confirmed that Tshabalala's job included assessments of threats against the president and cabinet members.
"The clearance level they have is top-secret. They have access to information that is limited to a handful of people. It is precisely this that makes the allegations around what these policemen did so serious.
"The ramifications of what they are alleged to have done are huge and if proved true will pose a critical threat to the safety of this country."
Hawks spokesman Captain Paul Ramaloko would not comment on the intelligence operations Tshabalala or Molefe were involved in.
"I will neither deny nor confirm the information. What I can say is that, given the seriousness of the charges, both policemen have been suspended immediately without pay," he said.
South African Police Union president Mpho Kwinika confirmed that Tshabalala was involved in assessing threats against the state and the president.
"These are high-level operatives, dealing with highly classified information," he said.
Kwinika, however, voiced serious concerns about the motive of the investigation.
"While we are disappointed by the allegations [and] we are not saying that they did not commit these crimes, we are concerned by what appears to be the sinister motive driving the investigation.
"Given his involvement in the Mdluli investigation, we strongly believe there is more to this than what meets the eye and sincerely hope that this is not a purge of good policemen," Kwinika said.
Tshabalala's wife, who refused to give her first name, said outside court yesterday: "We are fine. We have never been more confident and are convinced that this is nothing more than a ploy, which will be revealed in court."
THREE RUNGS ON THE SECRECY LADDER
He has access to classified information involving the president and cabinet ministers. When dealing with threats to the state, people with this level of clearance have practically unlimited access to intelligence.
This clearance level allows computer access to any South African's personal details - including banking, medical and travel records;
Times Live

How times have changed.

Top cops in the Intelligence arena are so well screened that they turn out to be professional Robbers?

The cliche' of It takes a criminal to catch a criminal appears to be false.

Criminals join the SAPS to stay out of Jail.

Or do they really?

Their Boss Richard Mdluli must have been a good example of leadership skills.

If the above facts are correct then TSHABALALA must have been working with Comm Bushy Engelbrecht on the Collin Chauke cases.

Are these officers 'fall men' as the allegations would appear.

This could be another 'Third Force' within the SAPS like those responsible for the cover-up in the BOEREMAG TRIAL late last year.