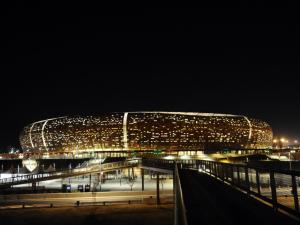 Millions of rand was stolen from the FNB Stadium after the Justin Bieber concert in May. File photo: Jennifer Bruce
Johannesburg - Police remain tight-lipped on whether there has been any significant breakthrough in finding the culprits responsible for the brazen heist at the FNB Stadium last month.
Two weeks ago, police said they were closing in on the robbers who meticulously carried out the sophisticated heist and stole over R3 million from a strong room in the FNB stadium just hours after teen sensation Justin Bieber had performed there. However this week police wouldn’t say whether they had made any progress.
Lieutenant-Colonel Katlego Mogale, spokesperson for the SAPS, said: “The case is still under investigation and as soon as there is information to disseminate to the media, the office will do so.”
The robbers apparently entered the strong room through a hole that must have been chiselled away, undetected, over a significant period. The money, proceeds from the sale of food and beverages from Bon Jovi’s show on the Saturday night and Bieber’s merchandise the following night, was being held in a safe ready for collection by a cash-in-transit company on Monday morning. Police and investigators confirmed that the heist had been a highly sophisticated theft.
Stadium Management’s chief executive Jacques Grobbelaar said two weeks ago he was confident that arrests would be made soon.
Saturday Star

PEOPLE SAW THESE CLOWNS DURING THE JUSTIN BIEBER CONCERN WHEN THEY WENT FOR A FAG.......