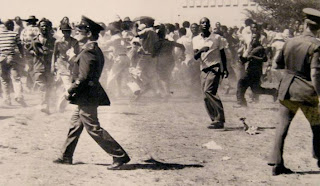 In 1976, I was a young American diplomat who had been assigned to Johannesburg the year before, following an assignment in Southeast Asia. Trying to understand Johannesburg, and South Africa, meant trying to come to grips with the country’s myriad of racially defined laws – as well as all the other things not actually enshrined in law but deeply woven into the fabric of this society. All of this became like a series of slaps across the face, even though America’s own experiences with racial segregation were still relatively fresh in the Washington, DC area and could have been a partial roadmap. By J BROOKS SPECTOR.

37 YEARS ON AND STILL VIBRANT IN MEMORY.

SOWETO WAS ABLAZE AND DR MELVILLE EDELSTEIN WAS ONE OF THE FIRST VICTIMS (INNOCENT) TO LOSE HIS LIFE -VIOLENTLY AND WITHOUT REASON!

HISTORY WAS IN THE MAKING!!

LET'S FACE IT, AMERICA WAS SEGREGATED BY A RAILWAY LINE, NOT LEGISLATION.

This story reads as if it was written by a first secretary of the CIA in the employ of the then, USA Government, and based at the American Embassy, PRETORIA.

THE POLICE DID NOT JUST START SHOOTING THE CHILDREN AS DESCRIBED ABOVE...!

THE CHILDREN WERE OUT OF CONTROL AND SUFFERING FROM MASS EUPHORIA/HYSTERIA WHICH DROVE THEM TO TOTAL DESTRUCTION OF LIFE AND PROPERTY.......

THERE WERE ALREADY RUSSIAN AND CUBAN TRAINED ANC CADRE ON THE BORDER OF SOUTH AFRICA WAITING TO INFILTRATE THIS VOLATILE URBAN SOCIETY!

NO MENTION GOT MADE OF THE SSRC,   ANC MK, SSAC OR THE BPM.

THIS WAS DONE IN THE SAME MONTHS BEFORE JUNE AND  LEADING UP TO THE END OF 1976.

WHAT PART DID AMERICA PLAY IN FANNING THIS URBAN VIOLENCE?

DID ENGLAND PLAY A GREATER ROLE?

THERE WERE ALSO MUTUAL DISCUSSIONS DURING THOSE FIRST DAYS OF THE RIOTS.