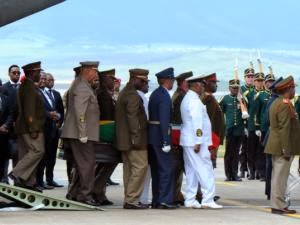 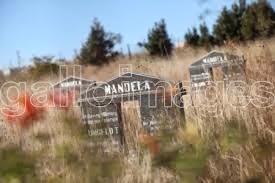 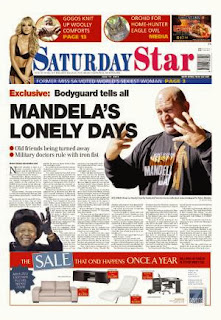 Mthatha - A military band played a solemn rendition of the National Anthem as former president Nelson Mandela's coffin was loaded into a hearse at Mthatha Airport shortly after 2pm on Saturday.
Mandela's former wife Winnie Madikizela-Mandela and his widow Graca Machel comforted each other as they watched the military operation to move the coffin from the aeroplane to the hearse.
Madikizela-Mandela had her arm around Machel.
Soldiers standing on armoured vehicles watched the route the procession bearing the body would take through Mthatha.
The cortege was expected to drive through the streets of Mthatha before being taken to Qunu, about 31km away.
Marshals along the route joined hands and lined up in front of the crowds gathered to pay their respects to the former president. Some climbed into trees to get a better view.
The plane bearing Mandela's body arrived in Mthatha shortly before 2pm on Saturday.
Soldiers holding automatic rifles were stationed along the runway, facing away from the plane.
They were tasked with maintaining the security perimeter around the plane.
Members of the Mandela family, Abathembu chiefs and other dignitaries looked on as the plane came to a standstill. It took several minutes for the engines of the C-130 Hercules to stop.
Some family members and elders disembarked from the plane before the coffin was removed and a military marching band played. It fell silent as the ramp was lowered and the hearse approached.
Mandela's coffin was carried out of the aeroplane at 2.04pm.
A military chaplain said a brief prayer of thanks.
“We want to thank You this day for having Mandela safely returned to his home province,” he prayed.
He asked God to grant Mandela's family strength.
The plane carrying Mandela's coffin left Waterkloof Air Force Base in Pretoria shortly before noon.
Speaking in Qunu earlier, AmaHegebe chief Phathekile Holomisa said that before the plane left and throughout the journey, an elder or senior male family member would talk to the body and keep it informed of the progress of the journey.
In accordance with tradition, the person would address Mandela as if he was still alive, Holomisa explained.
“This is so because his spirit lives.”
Mandela will be buried in Qunu, where he spent much of his childhood, on Sunday.
He died at his Houghton, Johannesburg, home last Thursday at the age of 95. - Sapa

At 12pm Midday tomorrow 15 December 2013 Mandela should have finally been planted in his 'final'
resting place.
That's if Mandla does not deem it fit to exhume the corpse and rebury it elsewhere?
It must have been an exhausting experience for our ex President Nelson Mandela.
May his soul now find eternal rest.
What will take place when the Sun rises on Monday 16th December 2013?
LIFE WILL GO ON!
* ACCORDING TO XHOSA CUSTOM CHIEFS AND NOBEL GET PLANTED AND COMMONERS GET
BURIED.