No fear No Favour No Crime Intelligence corruption..... 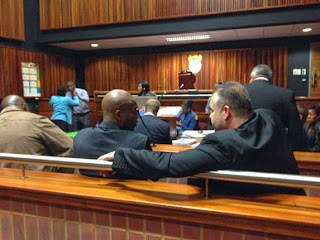 Johannesburg - The bail application of Czech fugitiveRadovan Krejcir and two Hawks policemen was moved from the district court to the regional court in Alberton, south of Johannesburg, on Monday.

Magistrate Geo Martini felt a higher court should preside over the matter, when it came before him in the Palm Ridge Magistrate's Court.

Following the decision to move the case, another magistrate, Reginald Dama, gave an order allowing the media to use their cellphones and take pictures inside the court room. At last week's appearance the court was cleared of media on security grounds.

Earlier in the day, security was tight in and around the court as members of the police, Ekurhuleni metro police and private security guards searched every car going into the court grounds.

Only accredited people were allowed into the courtroom where Krejcir was to appear. Journalists were previously told to leave their cellphones, laptops, and cameras outside the room.

Heavily-armed members of the police tactical response team stood guard at the entrance to the courtroom and allowed only accredited people in. Other people at the court wondered who was appearing and complained that they were being delayed.

One man said: "Ke [Jacob] Zuma a tlang court, re tla ema. [Is Jacob Zuma appearing in court? We will wait]."

Krejcir, Desai Lupondo, and two members of specialist police unit the Hawks - Samuel Modise Maropeng and George Jeff Nthoroane - were due to apply for bail.

Krejcir, arrested on 22 November, and Lupondo, appeared in the same court last Monday, where proceedings were held in camera for security reasons and postponed for further investigation.

Nthoroane, 46, and Maropeng, 41, appeared briefly in the same court on Wednesday. They were arrested on Tuesday.

While details of the charges the men face have not been made public yet, they were reportedly expected to face charges of kidnapping and assault, or alternatively attempted murder.

The charges are believed to be related to an incident in June.
- SAPA

Krejcir’s bail application is currently being heard in the Germiston Regional Court sitting at Palm Ridge.

Radovan Krejcir inside Palm Ridge Magistrates Court. Picture: Christa Van der Walt/EWN.
He is appearing along with three co-accused, including two Hawks officers, on charges of kidnapping and assault.

There’s a massive police presence with heavily armed officers flooding the courthouse and media initially not being granted access.

But cameras have now been allowed in.

Krejcir’s bail application affidavit has detailed allegations of abuse of power by the police who arrested him.
He has named Ximba, a close associate of Richard Mdluli, as the officer responsible for his torture.

The Czech has also laid the blame for the case against him with forensic consultant Paul O'Sullivan, calling him an unstable white knight vigilante, who has whipped up a media frenzy against him.

He has offered to pay bail and cooperate with the police, insisting he is not a flight risk and that he wants to remain in the country.

Road closure ahead of Czech fugitive Radovan Krejcir court appearance in the Palm Ridge Magistrates Court on 01 December 2013. Picture: Christa Van der Walt/EWN
Krecjir is also due to appear in court this week to fight on-going attempts to extradite him to his home country where he has been charged in absentia for money laundering.

of the SAPS Crime Intelligence Units!

Let's see how much the NPA is prepared to expose this time around?

Krejcir is not the only "HOOD ON THE LOOSE!"
Posted by Sonny Cox at 6:38 AM