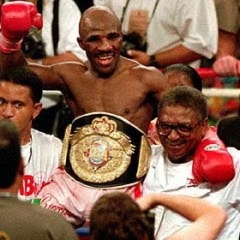 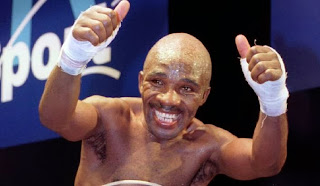 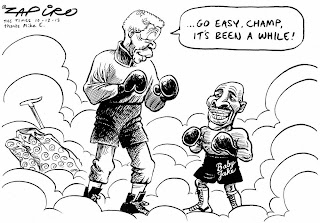 If there was one man who could perhaps have matched the late great Nelson Mandela as the peoples' champion in the 1990s it was Baby Jake Matlala, dwarfed in physical stature by the first democratically elected president, but fit to stand tall next to Madiba as one of South Africa's greatest heroes. By KEN BORLAND.

The 1.47m Matlala - the shortest world boxing champion ever - was the WBO and IBA flyweight champion, and WBU and IBA light flyweight champion - and the country was still deep in mourning over Madiba's passing when the 51-year-old passed away due to a lung infection associated with pneumonia.

The Soweto boxer's death is thus eternally linked to Mandela's, which is fitting because Madiba was a great fan of the diminutive but brave boxer. The president was ringside when Matlala fought for the last time, knocking out Colombia's Juan Herrera at Carnival City in 2002.

The great boxing fan - he never actually stepped into the ring and fought but used the sport as a training tool - was presented with the WBO light flyweight belt after the bout by Matlala.

Mandela made no secret of Baby Jake being his favourite boxer and the great statesman joked at one function that he would never hang out with boxers again because Matlala had received a bigger cheer than him.

Matlala was born in Meadowlands in January 1962, the son of a driver and a cook, and was a phenomenal amateur boxer, winning 198 of 199 fights. He turned professional at the age of 18 and was famous for his strict training regimen and for being a teetotaller.

His excellent conditioning meant he was able to compensate for a lack of reach by being able to deliver a flurry of punches and the body was his main target, working it ruthlessly until the head was dropped and came within range.

"They come out fast; I start slow, but with every round I step up the pace and the punishment until I'm hitting them as hard as I can and as often as I can move my arms, and because I'm so short I concentrate on the body and I just work it over mercilessly until their resistance is gone," Matlala told Gavin Evans of the Independent.

Probably his greatest triumph was against the highly-rated Michael Carbajal in Las Vegas in 1997, Matlala throwing an average of 130 punches per round until the Mexican was spared further punishment by referee Richard Steele in the ninth round.

Similarly to Mandela, Matlala was held in high esteem by all communities in South Africa. When he fell on hard times, even though he was a BComm graduate, the response to a charity dinner held on his behalf in 2010 was enormous.

Matlala's failure to have effective financial planning in place for his future was exacerbated by him having no medical aid when he fell ill with double pneumonia and by an extra-marital affair that led to him being blackmailed for R250,000 by a gospel singer, Julia Mnyamezeli, who was later charged with extortion.

The little man with the biggest heart was a popular figure even after his retirement and a regular attendee at charity events, and the future boxing stars of Soweto received the best tuition possible as Matlala coached at the Dube Boyz Club.

Matlala finished his career with 53 wins, the most by any South African boxer, in 68 bouts, and the sadness at his passing was perhaps exemplified by the Zapiro cartoon depicting Mandela and Baby Jake sparring in the clouds, with Madiba telling his favourite boxer to "go easy champ, it's been a while". DM