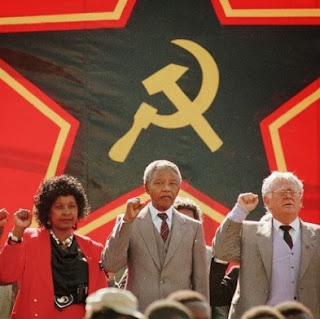 South Africa was one of the first countries to recognize Israel and was a major military partner for decades. Israel and South Africa had a joint nuclear weapons program and a joint unmanned drone program. South Africa also built military vehicles for Israel, while Israel made guns for the South African military.

Because of this, information from Israel State Archives has set off a shockwave. It is usually reported that Nelson Mandela received his main terrorism training in Ethiopia. However, Israel’s leading newspapers says it was not Ethiopians who conducted the training. Haaretz claims that Israeli intelligence trained Nelson Mandela to be terrorist leader.

Prior to the Six Day War of 1967, Israel was courting African Nationalist/Marxist movements in an attempt to win new allies for Israel. The efforts failed horribly. After 1967, all of Africa, except for South Africa was united in solidarity with the Arabs.

According to Haaretz, Mandela’s codename was ”the Black Pimpernel.” Haaretz says that Mossad agents falsely believed that Mandela was from Rhodesia. They did not realize he was actually Nelson Mandela until he was arrested later in South Africa. Documents state that Israel agents did know that he “leaned towards Communism.”

Today the ANC is anti-Israel and supports the Palestinians. Nelson Mandela himself has made anti-Israel statements.

It is noteworthy that at least two founding members of the MK, the terrorist wing of the ANC, were Jewish. Joe Slovo, a Lithuanian born Jewish man, took over the MK terrorist group when Mandela was arrested. He continued to be involved in terrorist attacks through the 1980s. He later became chairman of the South African Communist Party. Ronnie Kasrils, the son of Latvian and Lithuanian Jewish immigrants, also organized MK terrorism through the 1980s. Hareetz does not mention either of these two men.

Nelson Mandela was trained in sabotage, martial arts and weaponry by Israeli secret services a few months before he was arrested in South Africa in 1962.

According to top secret documents from the Israel State Archive revealed by Haaretz newspaper, Mossad agents in Ethiopia provided military training to the anti-apartheid icon and tried to instil pro-Zionist sentiments in the then 44-year-old South African activist.

His trainers were reportedly unaware of Mandela’s true identity, as he introduced himself under the alias of David Mobsari.


“It now emerges from photographs that have been published in the press about the arrest in South Africa of the ‘Black Pimpernel’ that the trainee from Rhodesia used an alias, and the two men are one and the same.”

“The aforementioned received training from the Ethiopians in judo, sabotage and weaponry.”

The Ethiopians was the nickname used to refer to Mossad’s unit in the African country, Haaretz reported.

Prior to his arrest Mandela covertly visited several African countries, including Ethiopia, to gather support for the African National Congress (ANC) and its struggle against South Africa’s apartheid regime.

The letter’s subject line was “the Black Pimpernel”, the nickname used by South African press for Mandela.

“He greeted our men with “Shalom”, was familiar with the problems of Jewry and of Israel and gave the impression of being an intellectual,” the letter read. “The staff tried to make him into a Zionist.

“In conversations with him, he expressed socialist worldview


s and at times created the impression that he leaned toward communism,” it added.

The top secret letter notes that Mandela was familiar with the problems of world Jewry and of Israel, and came across as an intellectual

The top secret letter notes that Mandela was familiar with the problems of world Jewry and of Israel, and came across as an intellectual Photo: GETTY IMAGES

Nelson Mandela received judo, sabotage and weapons training from Mossad agents in Ethiopia, it has been claimed

A top secret letter from Mossad – Israel's intelligence service – to the foreign ministry from 1962 discloses that the training took place that year, when Mandela fled South Africa in order to lobby leaders of other African states for financial and military support for the armed wing of the ANC.

Mandela approached the Israeli Embassy in Ethiopia with the greeting 'Shalom', using the alias of 'David Mobsari', reported the Israeli daily Haaretz, citing the extracts of the letter published for the first time.


Mossad were unaware of the true identity of Mobsari until they saw a photo of Mandela months later. Over the course of his training, Mossad reported that Mandela was particularly interested in the methods of the Haganah, the pre-state military force. In return, Mossad agents encouraged Mandela to identify with Zionism.


"As you may recall, three months ago we discussed the case of a trainee who arrived at the [Israeli] embassy in Ethiopia by the name of David Mobsari who came from Rhodesia," states the letter as quoted in Haaretz.


"The aforementioned received training from the Ethiopians in judo, sabotage and weaponry." The phrase "the Ethiopians" was apparently a code name for Mossad operatives working in Ethiopia.

The top secret letter notes that Mandela was familiar with the problems of world Jewry and of Israel, and came across as an intellectual.
The letter was discovered by the Israeli born scholar in South Africa, David Fachler.

“It now emerges from photographs that have been published in the press about the arrest in South Africa of the ‘Black Pimpernel’ that the trainee from Rhodesia used an alias, and the two men are one and the same.” 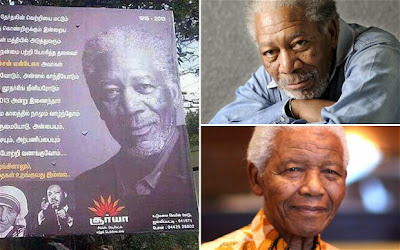 The poster featuring the photo of Morgan Freeman instead of Nelson Mandela Photo: Getty Images/AP


The owner of a billboard in India dedicated to Nelson Mandela was left red faced on Thursday after discovering that what he thought was a photo of South Africa's first black president was in fact one of the actor Morgan Freeman.


The billboard, written in Tamil, had been erected by the side of a road in Coimbatore as a memorial to the anti-apartheid hero and other human rights figures.


But Chandrashekhar, who paid for the tribute as a mark of respect for the former president, has since realised the board mistakenly bears the picture of a Hollywood film star.


The cloth merchant – from Chennai, south India – said the mistake had been made by a designer and would be rectified: “We will replace it with the correct picture of Mandela.”


Morgan Freeman, who played Mr Mandela in the 2009 film ‘Invictus’ alongside Matt Damon, has unwittingly been at the centre of various gaffes since the former president’s death, with some Twitter users making the same mistake as Mr Chandrashekhar and sharing Mr Freeman’s picture on the day of Mr Mandela’s death.