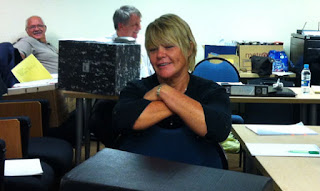 PRETORIA - Senior prosecutor for the National Prosecuting Authority (NPA) Glynnis Breytenbach has been found not guilty on all 15 charges relating to her handling of a controversial mining rights case.

Breytenbach was suspended in April last year for her handling of the case involving Sishen and Imperial Crown Trading (ICT). But she claimed she was suspended to stop her prosecuting policeman Richard Mdluli.

Chairperson Selby Mbenenge found Breytenbach not guilty on five counts relating to allegations she was influenced by Kumba’s legal representative, Advocate Mike Hellens, and that she allowed him to try to turn an accused into a state witness. Kumba is Sishen’s parent company.

Mbenenge found there was no evidence to show she conspired with Hellens and Advocate Nazeer Cassim to turn Archie Luhlabo.

The chair has also ruled there was no evidence to contradict Breytenbach’s argument that she was always in control of the case and didn’t lose objectivity, despite sharing a friendly relationship with Hellens.

The dispute between Sishen and ICT started in 2009 when Sishen laid a complaint against ICT, claiming it had committed fraud in its push for prospecting rights.