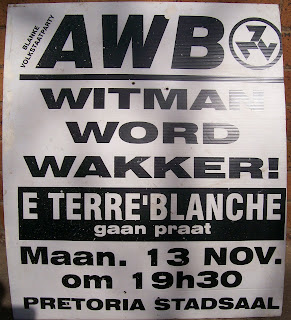 The Afrikaner settlement of Kleinfontein was invaded by a posse of black politicians, mostly driving black taxpayer-funded BMWs today. They also brought a fire truck and an ambulance. The last time an “outing” like this to Kleinfontein from the Gauteng legislature came with a budget of R270 000. Wonder if they have Louis Roederer Cristal and caviar en route, all the mostly white middle-class taxpayer’s expense of course?
Here are the first photos of the event.

Show of force: the posse driving into Kleinfontein

Taxpayers' money on display in the form of black cars from the Black Forest... err, in Germany, that racist white country

Our cars are worth more than your whole decrepit settlement, they seem to be saying

In case the discussion gets heated, they have brought the fire brigade to douse the flames... And an ambulance, in case any overweight politician has cardiovascular problems

Hermès bags anyone...? Dress your best when inspecting some middle-class Afrikaners doing their own menial labour

God bless the people of South Africa.
Posted by Sonny Cox at 12:22 AM