Cash-strapped SANDF: Between a bullet and a budget 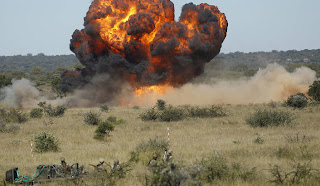 The South African Army can only cope with so many demands with the resources it currently has. Obvious as it sounds, this comment from the chief of the army is a sharp reminder to government, which is poised to deploy soldiers to the DRC, of the challenges facing the South African National Defence Force. Our soldiers can no longer do more with less. By GREG NICOLSON.

Could it be Russia or China?

Or, the Blood Diamond fields of ZIMBABWE?