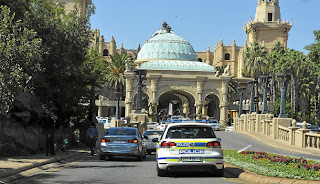 The report contains the findings of a team of directors general from the security cluster departments, including the departments of justice and correctional services. Justice Minister Jeff Radebe announced some of the report's findings at a media briefing on Sunday. The full report was released on Wednesday.

Read the full report (PDF)
The report makes it clear that the jet chartered by the Gupta family, which carried guests attending Vega Gupta's wedding, should never have been allowed to land at the Waterkloof Air Force Base. It says that no chartered or commercial flights are allowed to land at a military base except in emergency situations.
The report identifies the chief of state protocol at the department of international relations, Bruce Koloane, and the commanding officer of movement control at Waterkloof, Lieutenant Colonel Christine Anderson, as the main drivers behind the facilitation of the landing.
It says they met on April 24 with "an individual" from the Indian high commission to discuss arrangements for the landing of the plane", and that, later, Koloane "took it upon himself" to arrange for the "illegal" landing to occur.
Koloane is further alleged to have said Anderson gave the go-ahead for the landing, which "amounted to an abuse of an official working relationship to advance the interests of private parties". At one point, Anderson also said the request should be approved because "Number One" was aware of it.
The report said this amounted to an "abuse" of President Jacob Zuma's name and office. In the process, the report concludes that Koloane and Anderson led the charge in what eventually amounted to a "major security risk" for the country. The Customs and Excise Act was also violated when the wedding guests were afforded diplomatic immunity from standard customs security checks.
Their actions were a "serious dereliction of duty" and "they both grossly abused and undermined these [departmental] processes", according to the report.
Taking the fall
The two have been suspended from their respective jobs pending the outcome of internal disciplinary hearings. Speculation is rife that they are taking the fall for what their superiors must have known about. South African National Defence Force Union spokesperson Pikkie Greeff said as much in a statement released in early May.
Nevertheless, the directors general report sets out several charges against them, and leans towards the conclusion that they might have broken the law. But, in the report's recommendations there is no clear indication that either Koloane or Anderson will be criminally charged for their actions.
Instead, the report suggests respective departmental investigations should be expedited timeously so that "justice is seen to be done" and disciplinary procedures be "implemented where deemed necessary".
The report alleges that Koloane masterminded the landing through the exercise of "undue influence" by making three phone calls to various state officials.
These include calls to Defence Minister Nosiviwe Mapisa-Nqakula's political advisor, Sergeant Major Thabo Ntshisi, who is a senior officer at Air Force Command, and Anderson.
The report claims the three conversations contained references to President Jacob Zuma – which the justice minister on Sunday labelled as "name-dropping".
"The aircraft in question was cleared for landing and the correct clearance procedures were followed, but based on false pretences as a result of the manipulation of the process by the Gupta family, individuals in the Indian High Commission, Koloane and Anderson, who shared a common purpose and acted in concert," the report reads.
'Name-dropping'
It also exonerates Zuma, his ministers and other members of the executive from involvement in the debacle. The inference is that none of the executive were aware of, or gave explicit permission, for their names to be "dropped" in order to secure the landing.
"Neither the president nor officials in the presidency whether junior or senior, minister and directors general in Dirco [the department of international relations and co-operation] and defence and military veterans had instructed him to assist with the landing of the aircraft, the report reads.
It makes it clear that both Rajesh "Tony" Gupta and Atul Gupta personlly tried to gain permission for the plane to land at Waterkloof. At one point, Koloane apparently approached the defence minister's political adviser, asking for assistance in processing the request. Koloane said he was "under pressure from Number One".
Moreover, the only criminal cases that have been opened relating to the landing are aimed at prosecuting individuals involved in the escorting of guests from Waterkloof to the wedding in Sun City.
Five criminal cases were opened in relation to Tswane Metro police officers, who allegedly were moonlighting when they assisted in the transport of guests to the wedding under the auspices of an official police convoy.
But the Times reported on Wednesday that the majority of these criminal cases have now been dropped due to lack of evidence.

TWO STEP SOLUTION TO THESE PROBLEMS - IMPEACH ZUMA AND DEPORT THE GUPTA'S.

Only then, will South Africa be on the road to Democracy!

JACOB ZUMA WANTS TO BECOME A DICTATOR AND IS STANDING IN THE WAY OF A SOUTH AFRICAN DEMOCRACY!

HE HAS OVERSTEPPED THE "RED LINE!"

2014 SHOULD BE THE ANC's VOTE OF SELF DESTRUCTION!