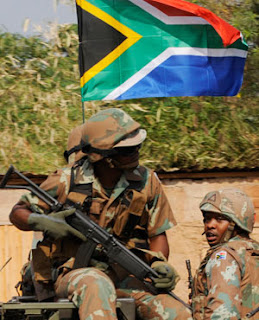 
Goma - Deployment of a unique new UN combat force, billed by UN Secretary General Ban Ki-moon as a peace enforcer for eastern Democratic of Congo (DRC), is being delayed by logistical difficulties and reticence from troop contributor South Africa.
An uneasy six-month peace in eastern DRC collapsed last week when clashes erupted between government troops and M23 rebels near the region's largest city Goma, days before a visit by Ban and World Bank president Jim Yong Kim.
The two men were on a mission to promote the latest international attempt to pacify the conflict-torn region, where armed groups, the army and neighbouring countries have for nearly two decades battled for control of land and resources.
A $1bn World Bank aid package aimed at bringing much needed development is to act as carrot for the plan.
But the stick - a 3 000-strong UN Intervention Brigade of Tanzanian, South African and Malawian troops with an unprecedented mandate for offensive operations against some 30 armed groups - has only just begun to arrive.
Ban said this week it may take up to another two months before the long-awaited force is operational.
"The troops are coming but it's more of a trickle than anything else," a senior UN official in Goma told Reuters.
To date, only around 500 South African and Tanzanian troops have arrived in Goma, UN sources say, with delays partly due to logistical and planning problems, including where to base South Africa's incoming troops.
Analysts say South Africa has also been irked by a perceived slight in the choice of both the brigade's command, which has gone to a Tanzanian, and the overall UN military leadership in DRC, which went to a Brazilian general whose last job was tackling criminal gangs in Haiti.
"It seems there was a lot of horse trading going on at the United Nations, rather than choosing the appropriate person," defence analyst Helmoed Romer Heitman said.
M23 won't target UN force
This led to some discussion over whether South Africa - keen to flex its regional muscles - might pull out in protest, according to Jason Stearns, director of regional think tank the Great Lakes Institute.
Rebels may also be using the delay to seize the intiative before the brigade arrives, Stearns said.
"M23 wants to be able to either prevent the Intervention Brigade from arriving altogether or to be in a very strong military position once it arrives," he said.
M23's military commander Sultani Makenga told Reuters on Monday his troops would not target the UN force but would defend themselves if needed.
He said reviving stalled peace talks in neighbouring Uganda was the only way to break the military deadlock in eastern DRC.
No one from the South African Defence Force was immediately available for comment, though military sources there say the force is undergoing training.
The South African government is determined, following the death in March of 13 of its soldiers at rebel hands durign a peacekeeping mission in neighbouring Central African Republic, to avoid a similar debacle in Congo, Heitman said.
It was the country's worst military losses since the end of apartheid in 1994.
"The intention is to ensure they are well-trained... They are taking on board the lessons of Bangui," he said.
Tension is rising as Congo's notoriously ill-disciplined army itches to avenge humiliations at the hands of M23, including a rout in November which saw the insurgents briefly seize Goma.
On the northern outskirts of the lakeside town, Indian peacekeepers have deployed tanks and set up a road-block - a thin, blue-helmeted line separating the two sides, with rebel positions clearly visible in the surrounding hills.
At least three civilians were killed last week after rebel shells fell in aid camps and residential areas, according to the United Nations. The army's increasingly aggressive attitude risks worsening the situation and jeapordising more civilian lives, Goma's Mayor Naasson Kubuya Ndoole said.
"I met a soldier who told me that if M23 continues, the army is prepared to chase them all the way to Rwanda," he said.
"This determination is dangerous. It's better this neutral force arrives to play the role of arbiter or to tackle the M23 calmly."
- Reuters

The only way he can run a country is DOWN!!

WHO WILL BAIL HIM OUT THIS TIME?

AIRPORTS.
Posted by Sonny Cox at 9:14 AM