Months after sanctions are lifted against the Mugabe government, the Zimbabwe state miner starts an auction of gems in Belgium. 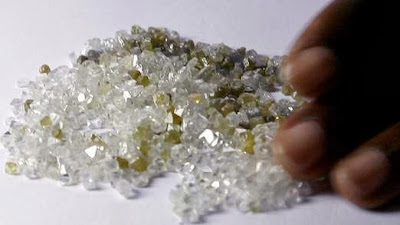 A picture taken on August 10, 2007 shows a man checking raw diamonds at a bank in Freetown.
Zimbabwe is to auction 300,000 carats of raw diamonds in Antwerp

Zimbabwe is to auction 300,000 carats of diamonds in the European Union, nearly three months after sanctions on the country's state mining company were lifted.

Wednesday's sale will be the first ever of the troubled African nation's diamonds in Antwerp.

Belgium, the centre of the global diamond trade, had pushed hard for the EU to lift sanctions on the state-owned Zimbabwe Mining Development Corporation (ZMDC), in line with an earlier agreement.

The Antwerp World Diamond Centre said the auction of the 300,000 carats of diamonds - equivalent to 60kg - would increase transparency in Zimbabwe's diamond industry.

"Antwerp is convinced that the combination of solid transparency, accountability and potentially increased mining revenues will contribute to a sustainable social and economic development of Zimbabwe," the AWDC said.

A file photo taken on December 14, 2011 shows a private security employee guarding a diamond processing plant in the diamond-rich eastern Marange region of Zimbabwe
A security guard at a mining site in the troubled Marange area (file pic)

Diamond revenues were a source of conflict in the previous coalition government formed by President Robert Mugabe and long-time opponent Morgan Tsvangirai.

Mines minister Walter Chidhakwa said on Monday that companies operating in Marange had reported alluvial diamond deposits, which are nearer the surface and cheaper to extract, were fast depleting.

The companies are now asking the government for new mining concessions and say it is becoming too expensive to mine deeper into the ground.

The Marange diamond fields, 240 miles east of the capital Harare, have been a focus of controversy since 20,000 small-scale miners invaded the area in 2008 and were then forcibly removed by soldiers and police.

Human rights groups say up to 200 people were killed during the process, charges denied by the Mugabe government.